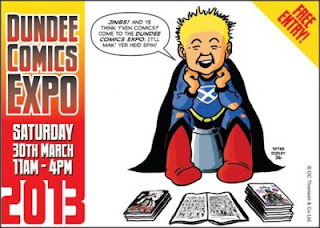 Well okay, not quite home but close enough, Dundee is only about an hour's drive away from my hometown so a perfect excuse to visit!

The Dundee Comics Expo is a new show organised by Dr Chris Murray and team from the University of Dundee. I've not yet had the pleasure of meeting the good doctor but he is behind the MLitt in comic studies course at the university and the annual 'Dundee Comics Day' run the last few years in October as part of the city's literary festival. Last year's event continued its excellent track record of attracting top guests including Grant Morrison, Frank Quietly, Frazer Irving, Dave Gibbons and more!

As far as I can gather the Comics Expo is a new stand alone event evolved out of the previous (and still ongoing) manga themed events held at the university.  I'd heard good things about these by our long-term comics friend Jenika Ioffreda, (creator and publisher of the rather groovy  Vampire Free Style) but, not producing anything manga related had been put off exhibiting ourselves. This new event is though more generally aimed at all comic fans and intends to offer something for everyone. 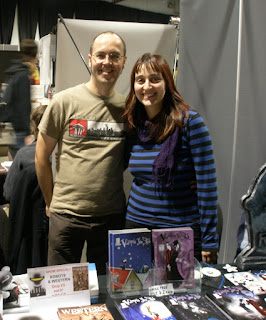 Colin and Jenika at Thought Bubble in Leeds 2010

The inaugural show will include a talk from its main guest David Lloyd, (artist of V for Vendetta and others and the driving force behind the recently launched Aces Weekly digital comic) and a comics workshop from rising indie star, Karrie Fransman (The House That Groaned) as well as a selection of artists, indie comics creators and comics dealers.

Big thanks to the ever useful UK comics news site Down The Tubes who's article brought the show to my attention.

I'm just excited as I've long wanted to 'do' a show in Scotland and while we came close to attending Hi-Ex! in Inverness, it sadly just proved too far away from deepest Cheshire. Dundee is still a fair hike but we can at least catch up with realtives at the same time and make a nice Easter break of it. Plus of course Dundee is home to the mighty D.C Thomson who's various comic publications I grew up and probably started my life long love of the comics medium, they've a lot to answer for and it'll be a pleasure going back to where it all kind of started...... 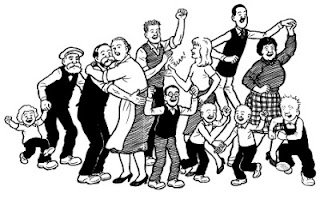 The Broons and Oor Wullie - D.C Thomson's favourites
Posted by Colin M at 20:15