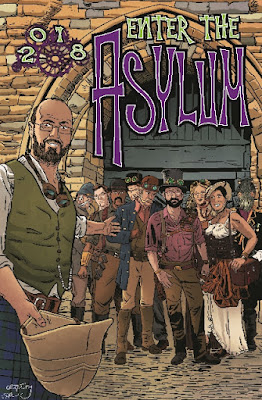 Accent UK's first ever Kickstarter campaign is currently running here for the opportunity to pre-order our exciting new comic launching at this year's Asylum, the steampunk festival which inspired the concept and the comic!

Find out more about the project from Dave West here with incredible cover artwork provided by Gary Crutchley, coloured by Matt Soffe - dodgy fellow on the cover notwithstanding! The project both features and is inspired by real steampunk personas encountered at last year's Asylum Festival so is very different from our normal stories.

A further departure for me is that I have scripted a story to be drawn by a talented new artist Anna Francesca Schiraldi who I first had the pleasure of meeting at last year's Edinburgh comic festival and caught up with again this year.

There will be more news to come but we're delighted that the Kickstarter was funded in less than 24 hours (around 14 we think!) of its launch so its safe to say that the comic will definitely be coming to life in August when you can Enter The Asylum!
Posted by Colin M at 11:26 No comments: 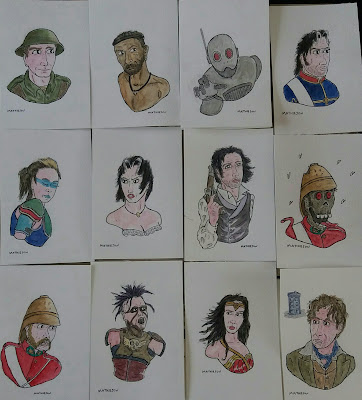 Well it has been a hectic last few weeks with fun comic trips in England, the US and Scotland all keeping me quiet, if time allows I'll post some pictures and comments about each one but in between those, family time and the next batch of shows in a few weeks, I've found time to catch up with some of my drawing!

Well namely its some more of the wee postcard sized watercolour sketches mainly of characters from my 'Moments of Adventure' comics plus a couple of guest stars! These are fun to do and although I don't directly sell them, I include them in packs of both comics & prints to make a nice little package for folk at shows. They're becoming increasingly popular hence the fact that I had to do some more since the last few events has virtually cleaned me out! 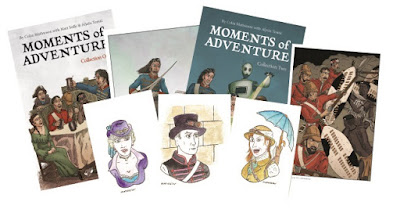 I try and make each one unique but try and maintain a good spread of my characters, MacBeth and sundry Zombies tend to be most popular so I'll likely do a few more of them plus one or two Steampunk ones in anticipation of this summer's shows. 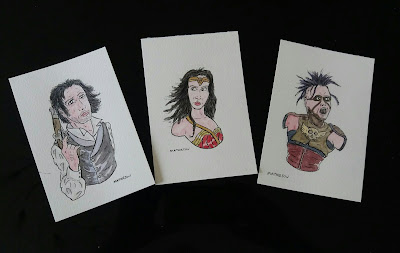