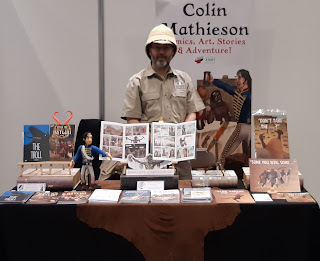 Well MCM London was fab the other week! Felt like a return to 'normal' and certainly in Artists Alley it was if anything better than 'normal' with footfall pretty steady throughout the three days which helped many, including me post record sales!

The interest in comics was pretty strong and although print artists appear to be in the majority at the show, most of my other comic making chums had also done well, which is great to hear. Oddly my own new prints didn't do so well although they did generate a lot of interest in my table and helped promote the comics so that was good.

It was great to see so many familiar faces and meet lots of new people too. I had many interesting conversations about comics, creating and lovely comments about my artstyle with a couple even comparing me to Herge's Tintin - I wish! I hardly left my table but did though have a sneaky look at Covent Garden's 'pop-up' Tintin store at the show and bag myself some goodies to celebrate!

I didn't get many photos at all, mainly just folk who came past the table - thanks to all those who kindly posed - but there were many wonderful costumes and characters. 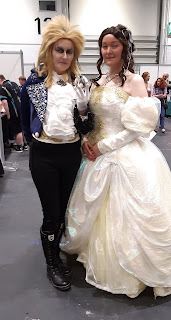 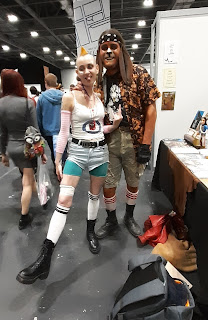 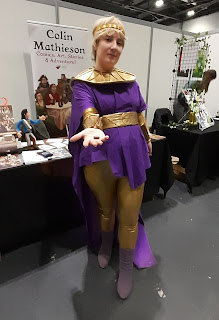 Special thanks to my Artist Alley neighbour, Eilidh Price who, with her partner, were a delight. It was her first-time exhibiting at the show but she was very well received and sold well with her amazing prints and art - I had to snag one myself as a forthcoming birthday gift for someone special, who I know will love her style. Check Eilidh's site out here and I hope to see her on the circuit again soon :)

All great fun and here's hoping I can attend again for their next one in the Fall, end of October. 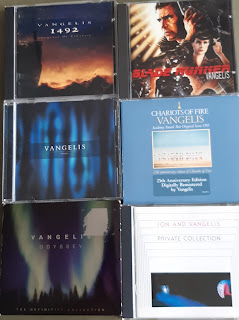 More sad news with the passing of Vangelis, legendary composer of many unforgetable tracks and soundtracks including of course, Bladerunner, Chariots of Fire and 1492:Conquest of Paradise. His soundscapes have been a constant of my adult life and it's no exggeration to say that I play a couple of his albums, if not daily, certainly weekly and have done so for years!

There's something transformative about his music so that if I need to really concentrate to get some work done, it can almost instantly transport my mind to that place where I can ignore external distractions and just get on with the job in hand. The only other artists that have this effect on me is the solo work of David Sylvian and to a slightly lessor extent, the music of  Dead Can Dance, but it is Vangelis that I invariably turn to most.

While I never saw Vangelis live like I did my ultimate musical hero David Bowie, he has been in some ways just as influential in shaping my mind and creative thinking.

R.I.P to an unparalleled genius.

Hard to think its's already a week since Free Comic Book Day at Scott's Pops & Comics in Warrington! So much planning goes into events such as this that they do just pass in a blur! 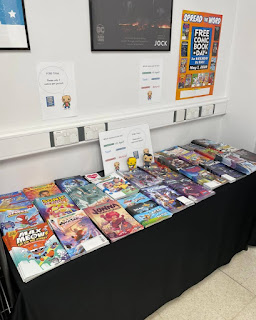 That said we're delighted to confirm that it was a great success, larger crowds than last year, more artists, more sales and many, more smiles as people discovered and re-discovered the joys of comics and chatting with some artists, independent and professional who make them. 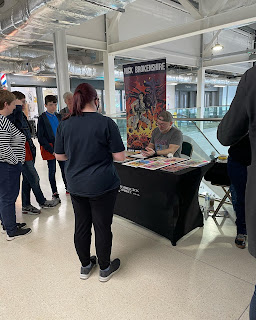 Scott also had more help (thanks Becky, Karen & Pete!) so was able to properly act as 'mine host' and circulate with the artists, fans and shoppers, just keeping an eye on things, helping out here and there and enjoying the day too. 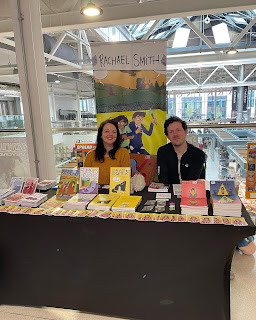 It seemed to be a more relaxed affair than with a pretty steady footfall throughout the day, avoiding the busy 'bottleneck' we had last time when it seemed everyone came at the same time. Scott probably had almost 50% more free comics than last time too and they virtually all went on the day so we know it was considerably busier, so all good and hopefully folk are enjoying what they picked up. 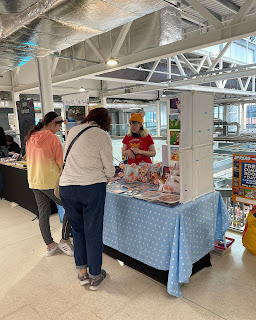 As ever, we almost forgot to take photos until almost the end of the day and even then a couple of the artists managed to hide from the camera, but something to remember the day by.

Same time and place next year? 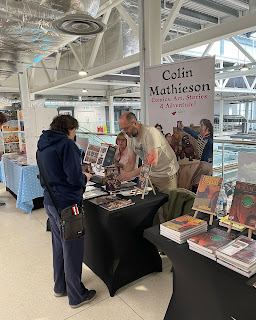 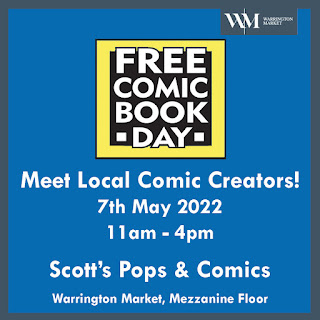 It's come round really quick but as mentioned a wee while back it's Free Comic Book Day this weekend and I'll be making a welcome return to Scott's Pops & Comics shop in nearby Warrington alongside a talented crew of comic creators - see below!

If you're around please pop in grab yourself some free comics, have a browse and purchase at a fab comic shop and meet some artists too, what a great way to spend the day and the food in Warrington market ain't bad too! 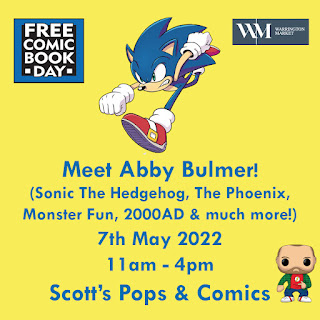 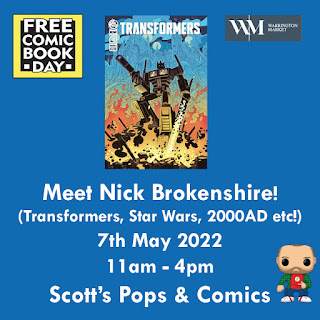 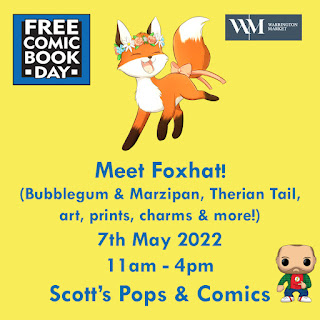 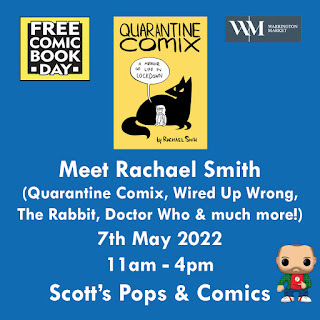 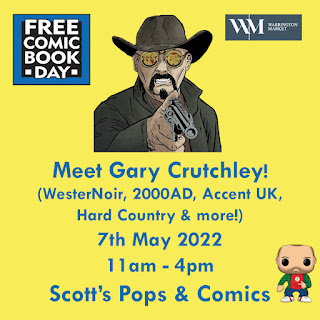 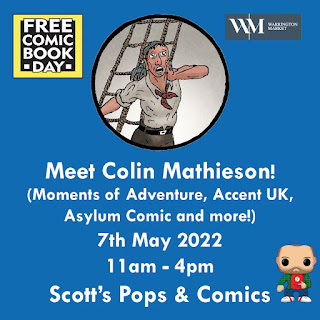 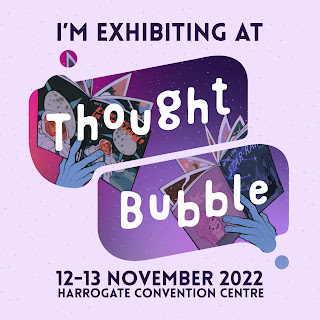 Yay! Very excited to return to Thought Bubble, arguably the UK's best pure comics focused event and one of our favourites. Our comics have been represented at almost every festival including its first Leeds Town Hall basement one way back in, was it really 2007? Gosh that seems so long ago now!

The Festival has evolved greatly over the years and grown into an internationally respected event always with comics and inclusivity at its heart. Much thanks and gratitude goes to retiring Festival Director Lisa Wood (artist Tula Lotay) and her able team who consistently deliver an event to be proud of.

This year will be its third time in Harrogate which from reports, appears to offer the event a natural home within a single venue after outgrowing it's various Leeds iterations. Being as it unfortunately clashed with previous re-arranged event commitments for me in 2019 (Art-Bubble in Copenhagen) and 2021, (Salute in London), this will actually be my first time at the Harrogate event, so I can't wait and am very excited for what new material I am planning to bring with me.

My excitement is only tempered by the fact that the event's popularity meant that several folks have missed out which is testament to the quality of comic work out there at the moment. Fingers-crossed that as many as can from the waiting list will find some joy. 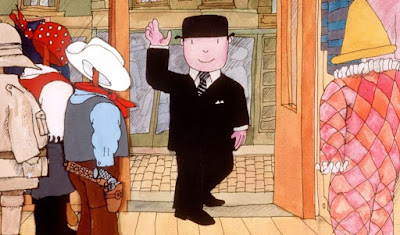 Sad news of another British artistic legend, David McKee leaving us. Talented creator of several timeless characters but for those of us of a certain age, Mr Benn will always have a special place, with the following probably my favourite.

See Down The Tubes and the BBC for insightful memoriams.

Hot on the MCM London news is confirmation that I'll also be attending Chester Comic-Con for the very first-time this coming Father's Day, Sunday 19th June 2022!

I'm quite excited about this as it's a local one at the iconic Chester racecourse with a good reputation but although in it's 4th (or even 5th?) year, the dates have always clashed with something, so I've never been able to go before.

I've previously lived and worked close to Chester so used to know it fairly well including it's own Comic shop which helped keep me sane when I first moved down from Scotland all those years ago, so it'll be cool to finally showcase my own comic creations there.

The event appears to be a fun family geared one with a carefully curated small number of pop culture and comic artist guests and attractions so there's something for everyone. With it being Father's Day too, promises to be a fun day out, hopefully see some of you there!