Getting all excited about Accent UK making our first appearance at Europe's largest Steampunk Festival, Asylum in Lincoln this bank holiday weekend! 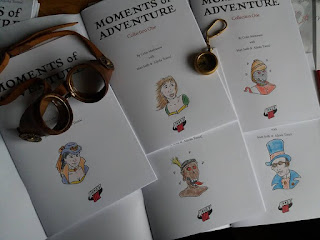 We are under personal invitation of the good Major and shall be establishing our travelling emporium in the 'pop up' Steam Embassy in the Cathedral Centre, along with other notable artists, scribes including that eminent gentleman, Steve Tanner of Timebomb comics.

Hopefully be a good one and a step into the unknown for us, rumour has it that Mr West has even bought a hat for the occasion! 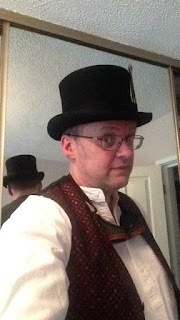 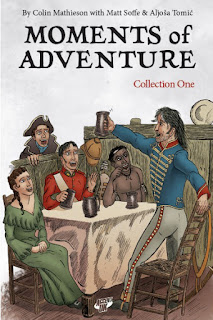 Aha, this is nice, Moments of Adventure has just had its first review from Starburst magazine's Kieron Moore who I met at last weekend's Manchester show - see it's not always about the sales!


I'm grateful to Kieron for showing interest in my work and for taking the time to write a thoughtful review. He says some nice things " rattles along at quick pace" and also some constructive things "twists you'll probably see coming" and awards it a respectable 7 out of 10 which I'm happy with as my first foray into creating comics for a wee while.


I'm not sure I've actually said a great deal on here now that Moments is finally out, mainly as I've found myself incredibly busy with working on its sequel, Zulu and of course all things Accent UK , but I'm pleased with how it turned out - thanks to the exceptional colouring talents of Matt Soffe and Aljoša Tomić - and very pleased with the reception its had at shows so far where it is developing into a steady seller!


I should do a bigger write up but Kieron's review includes a good overview of its contents and anyone keen to read it for themselves can catch up with me at a show soon - see our events list to the right, or order online through Accent UK's catalogue here.

It's not always about the sales! 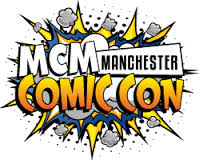 Well that was fun, Accent UK were exhibiting at last weekend's Manchester MCM, our 'hometown gig' and it was, as always fun. However unlike previous year's it wasn't a record breaker in terms of sales for us. In some ways, our recent success couldn't continue but it is always interesting to try and understand why sometimes you haven't done so well as before.


In this case we couldn't fault the crowds, tickets had largely sold out in what promised to be another record attendance at this enjoyable show and we got plenty of browsers through our central Comic Village spot, although noticeably more and more said they were 'doing the rounds' browsing before buying and while some returned to buy, many did not, but whether this was due to them finding something else more to their tastes or simply limited budgets is hard to say. 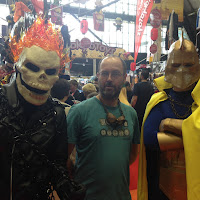 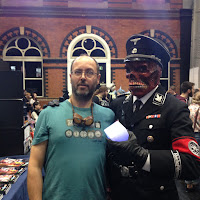 We also had 5 new titles since last year's show so there was plenty new on offer although disappointingly our launch of the new WesterNoir trade was unexpectantly postponed due to technical difficulties with the book, meaning that we quickly sold out of the few remaining #1's of the title which effectively killed off it's sales for the rest of the weekend.

That said we still did pretty well and with it being the 'hometown gig' we had no additional accommodation costs to cover meaning it was still a good 'un overall and I was personally pleased that once again my own Moments of Adventure comic sold steadily over the weekend.


We of course enjoyed catching up with regular faces on the comics convention circuit and renewed our recent Belfast acquaintances with Jenika Ioffreda and Gary Erskine, this time joined by smiling Steve Tanner (who reported that his Flintlock book had sold like proverbial hot cakes, proving that not everyone was having an 'ordinary' show saleswise) and Lorenzo Nicoletta, talented artist on Steve's afore mentioned Flintlock book who'd flown in specially from Italy!


And, proving yet again that you should never judge a shows performance purely on sales we not only met several folk from comics' fandom who may feature our books in forthcoming reviews etc but we were presented with three highly interesting opportunities which, if they proceed, will certainly raise Accent UK's profile by taking our books into new areas!


As is the way of such things, we can't really say anything about two of them at the moment, however the third is something that has been brewing away in the background since last October's London MCM show and that is that we have been invited to attend Asylum, Europe's largest steampunk festival in Lincoln late August bank holiday weekend! 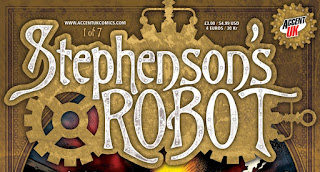 This really follows, regular MCM attraction, the Victor Steampunk Society's (VSS) interest in our comics, most notably WesterNoir and Stephenson's Robot at previous MCM shows and thinking they may be suitable for their authors exhibition area to be set up in the Steampunk Embassy in Lincoln's Cathedral Centre.


At Manchester, the VSS's good Major confirmed that all our papers were in order and that we would be receiving our deployment orders soon, so all exciting stuff, of course this does mean that we will have to dress up and Dave has that troublesome big head to find a hat for!