While I catch up between by trips I see that Adrain Tooth gives Accent UK a wee mention in his recent blog about the Stoke-Con-Trent which you can read here.

Also it was a rare delight to see and chat with Joe Gordon - he, of forbidden planet blog - at Edinburgh last weekend and he too was quick off the mark with his wee report which you can find here.  I had a splendid time at Edinburgh and hopefully will have time to do my own report before my next travels.

Be warned though both blogs contain photos of yours truly and many other fine comic folks!

Oh and while  I've been a bit tardy on my own write-up from this year's Copenhagen Comics festival, that fine fellow Garen Ewing recently did his own one here  which is a good perspective on European comic shows. 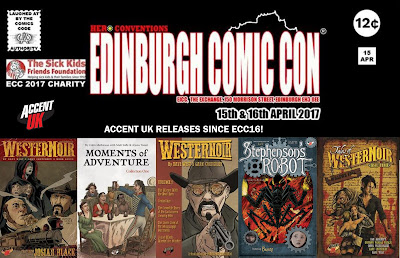 So I'm just about set for this weekend's return to Edinburgh Comic-Con and realised that the next three shows are all in Celtic countries of Scotland (twice) and Northern Ireland - I just need Wales to complete the set! This little 'Celtic Tour' is also different as I'll be 'solo' at them as, my Accent UK partner, Dave West is unable to make the trips :(

Don't feel sad though it's only logistics which is keeping Dave from accompanying me as we juggle this year's schedule of shows - the eagle-eyed may spot that we've already added two more since the last update - both in England to balance these Celtic ones! Its been a long time since I flew solo, so we'll see how I get on. It shouldn't be that bad though as the comics community is a friendly bunch and I should see a few familiar faces at each of them to I'm sure keep me company.

Mind you this is what happened at Edinburgh last year when Dave was keeping an eye on me! 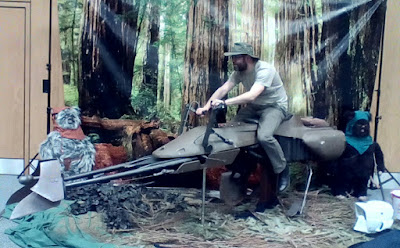 A couple of weeks after Edinburgh will be Accent UK's first ever trip to Enniskillen who's Comic Fest returns for its second year. The show was highly recommended by our good friend Jenika Ioffreda and I'm quite excited about, particularly as its to be held in Enniskillen Castle itself!

Tharg has also recently awarded the Fest Official 2000AD 40th anniversary partner status as the mag continues its celebrations so expect several art & script droids to make the trip. While its our first time in Enniskillen, we have of course exhibited in Northern Ireland several times at the popular MCM Belfast shows so know there are many enthusiastic comic fans over there. At the moment though Enniskillen is likely to be our only NI trip this year as the MCM Belfast dates clash with Birmingham Comic Festival and as I've previously commented on, we sadly can't do them all.

The final leg of my wee tour suitably winds up at my North East homeland in Aberdeen's Granite City Comic-Con which is now in its third year. I shouldn't be quite so lonely here as, apart from catching up with relatives and comic chums, I should be joined at the table by Ace sales team Adam and Joe who did a sterling job last year, freeing me up for an occasional wander round the show which I, apparently, am prone to do!

Then a week after Aberdeen, the Accent UK team are re-united down south at the mighty MCM London show where both Scott and Dave will be in attendance while I perhaps take things a wee bit easy!

Please say hello if you're at any one of these shows where hopefully you will find a few new books and surprises since the last time you saw us! 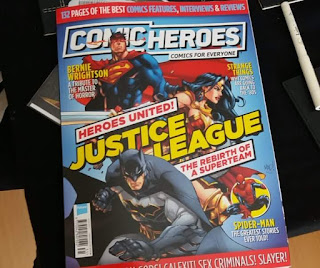 Ha! Ha! we'd almost forgotten about this but the latest Comic Heroes magazine is sure to be a best seller as it features a wee spotlight on Accent UK and interview with Dave West!

It's a lovely two page spread conducted by Miles Hamer who contacted Dave after recently reading his Whatever Happened to The Invisible Man? title. I assisted a wee bit and supplied the images and am delighted that it's come out so well - and amazed that I found a decent photo of Dave to use! 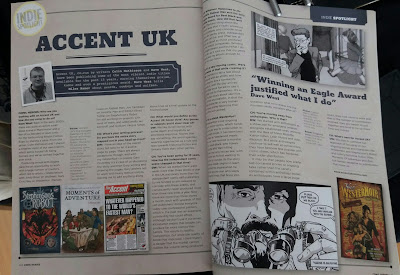 The same issue also features long time peer - and recent Copenhagen Comics companion, John Anderson of Soaring Penguin Press and my newly made chum from Stoke, Marc Jackson, who I understand regularly supplies a strip for the mag.

All in all its a good read and, as they say, available from all good newsagents - but grab it quick, that pic of Dave ensures it won't stay on the shelves for long!
Posted by Colin M at 09:54 No comments:

Just a few words about Sunday's Stoke-Con-Tent which was good fun in a bright sunny day in the potteries. Gary and I were making our second appearance at the twice yearly show and were joined by Gary's long term chum Chris Przygrodzki who is also making his Accent UK artistic debut with Tales of WesterNoir 3!

The Staffs University team couldn't have made us feel more welcome with smooth friendly set-up and regular check-ins throughout the day offering us teas and coffees and water - they even offered a certain Dave West's favourite tipple of Earl Grey which I'm sure he would approve of, even if he couldn't make the trip this time.


Fun and enjoyable as it was, it was noticeably quieter than our previous October experience, possibly only half as busy? A number of factors came into play, the warm day, a number of rival shows (we counted 5!) including one in North Wales, not too far away, but the biggest one was that with it being the start of Easter, the uni itself had just 'broken up' the previous Friday, meaning many students had already made the trip home.


This reduction in attendance was reflected in our sales which were just over 1/2 of the previous October, but being a local show, its inexpensive to attend so we were still happy with things and there are worst ways of spending a Sunday - Gary had skipped doing DIY for example!


We all took the opportunity to have a look round the show and although I didn't make it to all the attractions, it was clear there was a nice vibe about the place. In addition to the uni staff who run the cartoon and animation course, Gary and I caught up with some of the students we'd previously met when we'd been invited in to speak after the October event, and see how their work was progressing - as well as the challenges of the course itself, the students are all encouraged to prepare for and exhibit at the con which is a real test for them to display and sell their work for the first time! What a great opportunity to learn from though in this friendly environment, both Gary and I were impressed when we visited and bemoaned the fact that there was nothing available to us when we were their age, however long ago that was!

I was particularly pleased to catch up again with Jessica Martin, a musical actress and entertainer who we've gotten to know these last 2 or 3 years as she's bravely added 'comic creator' to her resume. Her energy and enthusiasm are infectious and I was pleased to hear of her forthcoming comics projects, including turning her own colourful life into a graphic novel to be published by Unbound, and is currently the subject of a fund raising campaign which I had already happily backed. Jessica was at Stoke embracing her Doctor Who pedigree where she played werewolf 'Mags' to Sylvester McCoy's Doctor, so it was good to chat to her about that and also with her long time chum, Bob, who frequently accompanies her on these excursions.


Caught up with most of the other comic creators attending, albeit briefly in some cases - see the poster in my previous Stoke post for full line-up! Also met Marc Jackson for the first time who is an artist who's worked for the Beano, ACES Weekly and produced his own work and, it turns out, is fairly local to me in Cheshire. We have a few mutual contacts and Marc is also involved in comic events, more of which later!

Right, so yes a good enjoyable day in the sun and a show we'd hope to return to again - possibly this October, if they'll have us! 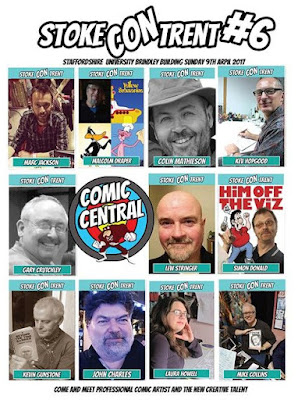 Here's a spiffing new image for this Sunday's Stoke-Con-Trent Comic Convention where Gary Crutchley, new Tales of WesterNoir artist, Chris Przygrodzki and yours truly are all attending! This is a popular show held every 6 months or so at Staffordshire University campus with a fine mixture of new, established and up and coming comic creators alongside some familiar names from TV & Film including Doctor Who, Star Wars, Game of Throne, Power Ranger and Walking Dead etc actors!

Here's a few pictures of when we first attended last October and if its anything like that one, it should be fun, come along and say 'hi' if you're around :) 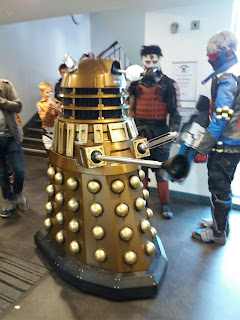 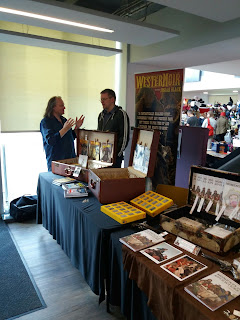 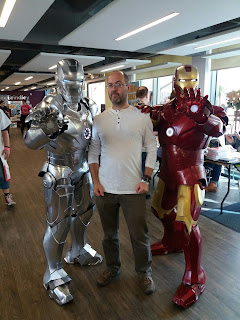 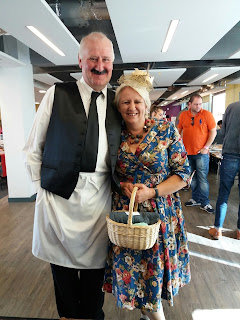 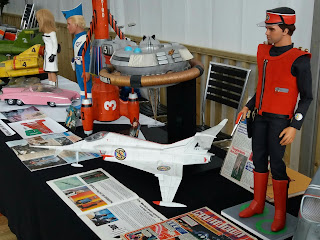 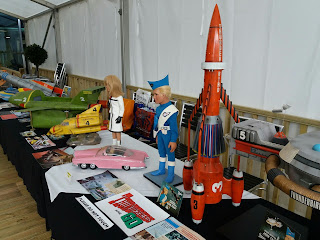 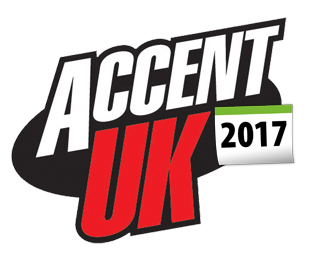 No it's not an April fool, but since it is April, I thought I should finally reveal our 'tour' schedule for 2017! Better late than never considering that we've already made appearances at Copenhagen in February and Liverpool in March! Both of which were fun shows, books were sold and photos taken so you never know a write-up may (or may not) follow!

One thing to note though about this year is that although we intended to return to most of last year's shows and maybe take in one or two new ones, possibly breaking 2016's record of 16 shows, this won't now be the case. Due to changing circumstances, logistics and a couple of date clashes mean that the planned DemonCon, Dunfermilne, Killarney, Oxford, Belfast and Glasgow events are now missing from our itinerary!

Replacing them though are an early return to Stoke (next weekend!) and new appearances at Enniskillen and Glenrothes and a decision to 'split' the Accent UK team to cover both September's Glasgow MCM and Leeds Thought Bubble shows which now share a date. It's not been easy and hopefully there may be one or two still to squeeze in but again shows the hopefully 'rude' health of the UK comic convention scene at the moment as there are still dozens of other shows out there that we just couldn't consider without cloning ourselves!

So there we are, keep an eye here and on twitter and facebook for further updates but still plenty of chances to catch us this coming year and see what new releases we have planned, the first of which will be available at the aforementioned Stoke Con Trent show next Sunday, where alongside yours truly, Gary Crutchley and artist Chris Przygrodzki will be in attendance to launch Tales of WesterNoir #3, Accent UK's first release of 2017! 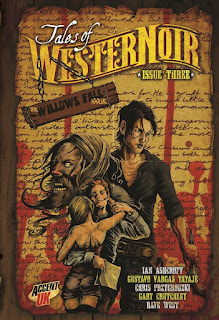