Next up for us is a new Birmingham show, The Comics Festival in April at the Cricket ground in Edgbaston which is shaping up nicely as you can see at their site . In fact I was recently told that there are now around 50 comic shows and festivals in the UK alone which is incredible compared to a few years ago when Accent UK started when literally there were only 2. The influential Bristol International Comics Festival and the much smaller Caption in Oxford - we'd sadly missed the old London based UKCAC shows which had finished a couple of years before we started. Later these shows were joined by the equally important and enjoyable BICS, (Birmingham International comics Show). Of course all things come to an end and both Bristol and BICS are long gone and I've lost track of Caption which itself has had several committee and venue changes.


This range of shows makes it really tough to decide which ones to do, particularly as we try and do at least one European show as well, although we've now 'dropped' the US from our schedules as the economics are not just there. Sadly costs are a very important factor in our decisions, you of course want an enjoyable time at a show, catching up with friends, making contacts etc but if you're not covering costs then its difficult to justify, and with so many choices, you're perhaps best to try elsewhere.


Our biggest cost is usually accommodation as sometimes we, rightly, make a weekend of it with our families but its sobering to see that for theses prices you could perhaps attend a show in Europe instead! It was with these thoughts that we made a fairly radical change from our 2013 to 2014 show schedules which, as reported, thankfully paid off with record sales and some great experiences, exciting contacts made, new creators and opportunities discovered.

Thankfully that all made selecting our 2015 show schedule much easier as we intend to return to most of the show attended last year, dates and table availability allowing. You'll see therefore that our provisional tour schedule is now available on the right of this blog including a very welcome return to probably our favourite show on the planet, Copenhagen Comics. This will be our 6th time at this bi-annual festival, where it took time for us to grow and develop and audience - of course totally breaking my above advice on 'covering costs'! - but we now have many friends over there and hopefully have sustained a readership of our books, justifying the expense, plus its so darn fun!

As well as the above mentioned Birmingham Comic Festival, the other 'newbie' on our list is Aberdeen's Granite City Comic-Con, which I'm really excited about since this is real close to my North-East of Scotland hometown and where I worked after first leaving school all those years ago! It's even closer than the recent Dundee shows which I've really enjoyed and, sadly with family commitments can't make this year, so to say I'm fair-tricket is an underestimate!

All this means that sadly its unlikely we can attend other shows at the moment, (but never say never!), its going to be another busy year and we need new books to sell! At the last look though, we have six books currently in production for release this year - in addition to the newly released WesterNoir 5 - including this wee one which is gathering steam.....

Coming up this weekend is Accent UK's first convention appearance of 2015 as Dave and Gary return to sunny Maidstone for this Sunday's Demoncon 9!

Sadly my passport doesn't cover trips that far South but the chaps had a blast last time and are delighted to be returning, giving them a good chance to chinwag on all things WesterNoir with one or two exciting developments bubbling along. The most imminent is of course Issue 5 which is hoped to be launched at the event, print delivery allowing.

This issue, as Dave and Gary teased some time ago, really turns things on their head as we learn more, a lot more about events behind Josiah Black's actions, I'll not say more but look for this cover either at Maidstone or a show near you soon! 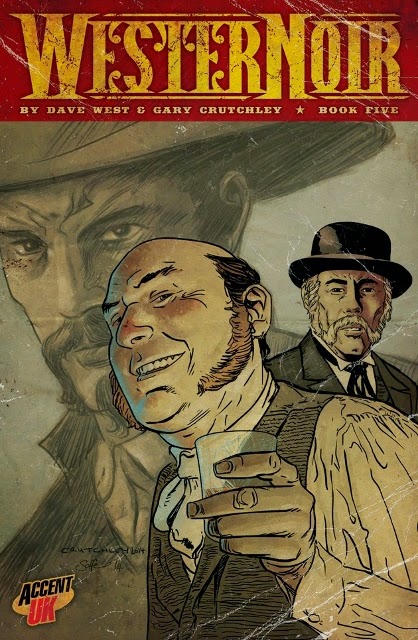 For those who were unable to attend Leeds Thought Bubble Festival last year, Demoncon will also be the next place to pick up WesterNoir's spin off 'Tales Of' series and Stephenson's Robot, both of which were successfully launched in Leeds.

And if you need any further incentive, here's a link to a very timely review of Stephenson's Robot from Down The Tubes stalwart, Jeremy Briggs. 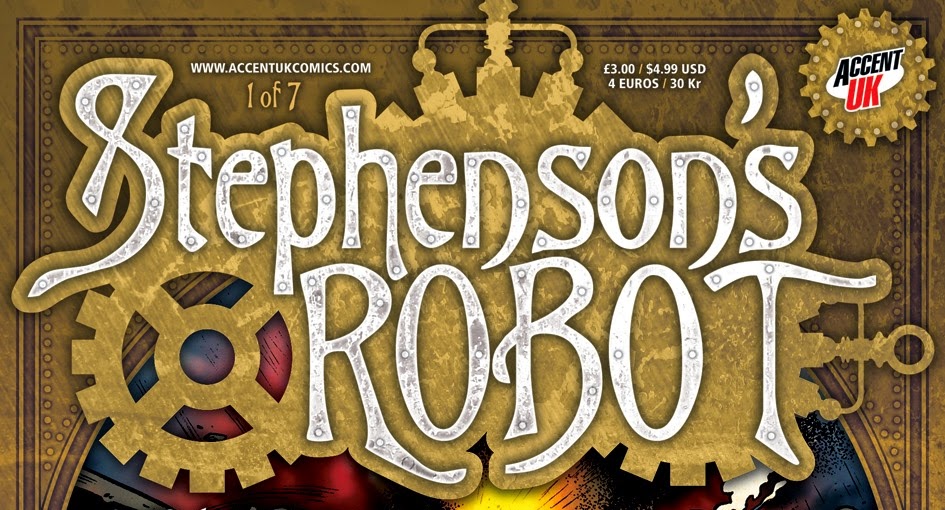 Don't worry if you can't get to Maidstone as Accent UK's 2015 tour itinerary is starting to take shape and details will be posted here or at Accent UK's own site very soon.