Doctor WHO and the Angels! 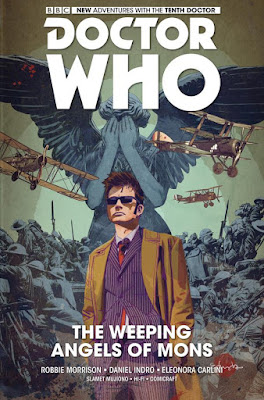 Here's a pleasant surprise, although I'm not a big fan of Doctor Who, I've just finished reading a recent Father's Day gift (thanks Scott!) of the Tenth Doctor's graphic novel and really enjoyed it!

The collection from Titan Comics contains the 4-part Weeping Angels of Mons and the shorter Echo story, both written by Robbie Morrison and illustrated by Daniel Indro and Eleonora Carlini respectively.

The 'Mons' story cleverly ties in the good doctor's adventures with World War One in both respectful and entertaining fashion as The Weeping Angels, (of the TV episode 'Blink' I think?), descend on the war torn French town of St Michel where the defending German soldiers have strangely disappeared. 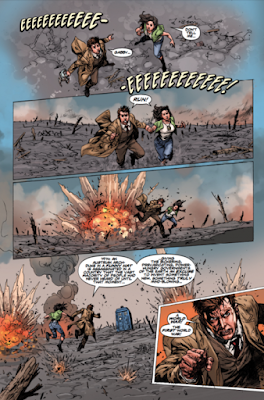 The story moves along at a fair clip and suites the Tenth Doctor, David Tennant's personality of the TV series, being equal measure frantic, playful, beligerent and arrogant. The supporting cast, paticularly the Scottish soldiers are surprisingly well rounded given their limited space and, minor character identification confusion aside, you find yourself emotionally invested in them. 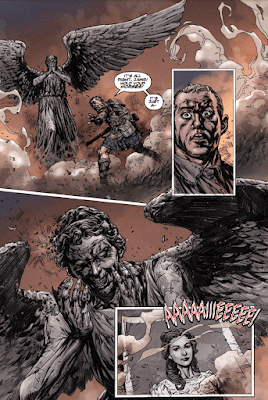 That this story comes from well respected comic scribe, Robbie Morrison should be no surprise given his back catalogue (of which White Death is a classic war story) and the art from, unfamilar to me, Daniel Indro perfectly captures the characters and the action.

The short Echo story suffers in comparison with the main 'Mons' event but is a fine, fun disposable tale with servicable art and shouldn't detract from a quality collection.
Posted by Colin M at 11:01 No comments: 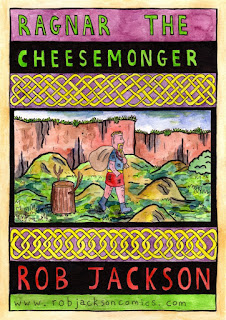 I've known and been a fan of Rob's work for many years now with his French revolution set 'Cafe Le Guillotine' (from 2006?) being the first to attract my attention and I've been a fan of his storytelling ever since. He's amazingly prolific, usually producing 2 or 3 titles a year and always has a project or two on the go, putting most of us indie creators to shame.

Ragnar is his new one, set in Viking times and at 52 b&w pages is quite the epic, but Rob being true to form concentrates his tale on an ordinary fellow, a cheesemonger, who through no real fault of his own finds himself trapped in a potentially deadly situation.


Told in Rob's easy engaging style, Ragnar doesn't disappoint with its moments of tension, humour and absurdity which makes for an entertaining read. If you've not sampled his work before this makes a great starting point and can be purchased for only £6 including UK postage from his shop here -while there, why not take an inexpensive gamble on any of his other titles for a refreshingly honest and rewarding approach to comic making!

For updates on Rob's comic activities, also see his blog or follow the link from my site, enjoy!