After almost a month's break, the Accent UK tour bus is rested and ready for a return journey to Glasgow, this time for a much anticipated return to the MCM Scotland show! We were fortunate to attend the inaugural show there back in 2013 and had an amazing time but sadly events and commitments have kept us away since, so we've missed out as it's developed, we understand, into a vibrant and successful two day show, rivalling MCM Manchester in it's attendance.

I think we've over a dozen new releases since 2013 so hopefully we'll find an appreciative audience waiting for us there, wish us luck!

Aha, delighted to have found this great video review of Moments of Adventure: Collection One from the TorAthena youtube channel!


I recall meeting Lucy aka TorAthena at the recent Manchester MCM show (see again it's not always about the sales!) where we chatted about Accent UK's range of comics, and she confessed that she was a big fan and supporter of independent comics but hadn't seen our stuff before so bought a couple, including Moments to check them out, so I'm really grateful to her for taken the time to read and discuss my little comic, thank you Lucy!


As seen in my last posting, I rather enjoyed Accent UK's visit to the Asylum Steampunk Festival so wanted to share a few more of my pictures that there was no room for before;

As for my favourite picture of the weekend? Sorry Dave, it still has to be this... 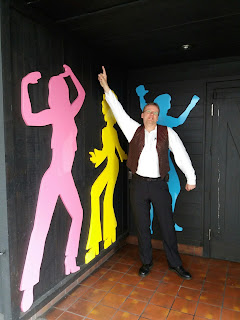 Wow! I think that's (almost) all I can say after our August bank holiday appearance at the annual Asylum Steampunk Festival in Lincoln as I'm still processing it all really!

As you'll know Dave West and I under our 'Accent UK' comics banner regularly attend comic conventions up and down the country (and sometimes further afield) exhibiting our creator-owned comics and graphic novels. We've done this for many a year now so are somewhat old hands at it and even when we try a new show or location we've a pretty good idea what to expect.


Asylum was, as we'd been warned, nothing like anything we've ever done before, it really took over the whole city of Lincoln with shop displays, bunting, street stalls, attractions, buskers, full evening programme and 8 or more separate venues all celebrating the world of steampunk to devoted followers and bemused public alike. Then there were the fashions and costumes, most home made and extravagant and very different from our usual comic cosplayers, who base their outfits on established comic strip or movie characters. These were all unique demonstrating the wearer's own individuality, often adopting a 'nome de plume' as their steampunk alter ego!

One thing the steampunk crowd did have in common with comic convention people was a shared enthusiasm of their interest and being friendly and approachable to each other, the positive vibe was everywhere, even when the Lincoln weather did it's best to dampen spirits.


We were set up in a new venue to the event, The Cathedral Centre, a 13th century building in the shadows of the magnificent, almost 1,000 year old, Lincoln Cathedral! The Centre had been christened the 'Steampunk Embassy' for the occasion and we were set up with fellow comicers, Steve Tanner (Timebomb), Lauren (Cactus Illustration) & Jade Sarson (Tea Hermit) and in an adjoining room several authors, photographers and role-playing game demonstrations including the delightful Tom, Nimue and James Brown - sorry didn't get everyone else's details or photos!


We were upstairs, (above the centre's cafe, where the poor ladies were truly run off their feet!) and had responded to the good Major Tinker's invitation challenge to not 'just' sit behind our tables selling, but to create an interesting display and to engage with visitors, (we were after all to be 'ambassadors' for the event!). This request had initially troubled then really inspired Mr West and I these last few months as we dismantled our normal display and started from scratch, scouring our homes, lofts and charity shops for suitable items and we were delighted when the good Major and others congratulated us on our efforts - phew - so much so that we are planning to bring a little of this to our future comic show displays - not sure if Dave will wear the hat again though!

Hat's not withstanding, our only disappointments of the weekend were not actually seeing or truly experiencing the event as we were pretty much bound to our own venue and access to much else that was available was by wristband or tickets only, of which we had neither. From conversations though we picked up that there was a whole lot more going on, (a whole lot more!) which justified Asylum's claim to be Europe's largest Steampunk gathering.


Also, perhaps because there was so much else on offer or because we were in a new venue, a little off the beaten path, we didn't really experience the crowds or footfall that were evidenced elsewhere with only a small fraction of visitors finding their way to our emporium. This wasn't for the want of trying by the event organisers & volunteers who quickly responded by erecting additional signage (including our own WesterNoir banner) and placing friendly 'ushers' outside which did help to increase numbers but not in the volumes that may have been expected.

This was a shame as there were some real treats inside and we found that our comics & graphic novels had a warm reception, particularly those with a, not surprisingly, strong steampunk or historical element doing best, so that our launching WesterNoir trade, Stephenson's Robot and Moments of Adventure titles all sold well. Modestly perhaps compared to the larger comic shows but respectful enough for a 'debut' event which effectively this was for comics.


That said, we had a fun time and enjoyed the delights of Lincoln in the evening and remain inspired by the steampunk genre so are already talking with the organiser's to see what we can do to assist the venue (and comics) achieve their potential next year - watch this space!

And on that note, here's a wee image of us taking tea (& cake) and plotting our return.... 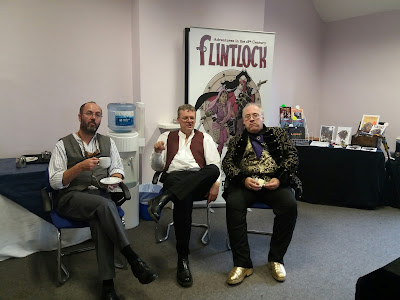