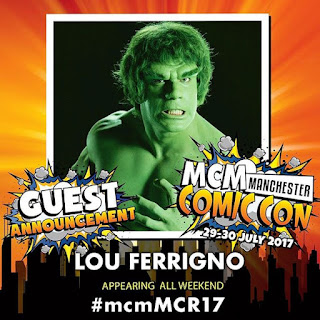 It's been a very quick year but this weekend sees the return of my (adopted) hometown show MCM Manchester, this time with added HULK!

The full Accent UK crew will be pitching up in the Comics Village with our latest comics, prints and special offers in what is always an enjoyable and friendly show and being one, for me, involving minimal travel for once - yay!

You can see some pictures and reports of previous Manchester shows here, here and here but if you're around please stop and say 'hi' - just be careful not to make us angry, you wouldn't like us when we're angry! 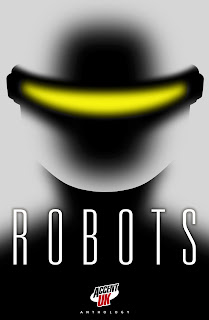 My comic strip 'Null 'n' Void' which featured in Accent UK's sold out anthology ROBOTS (Andy Bloor cover above) will soon be reborn in the forthcoming Moments of Adventure: Collection Two! I thought therefore I'd share a little of the process behind the development and 're-mastering of the strip prior to it's printing and publishing.

Me being me, I tend to hold onto things so here's a scan of page 2 that I made at the time from my original pencils! 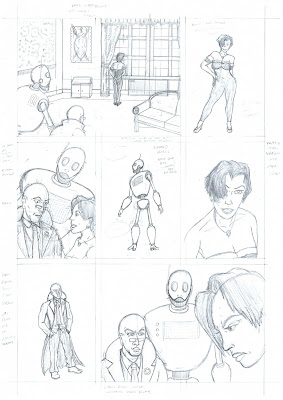 For ease, let's zoom in and concentrate on the last panel: 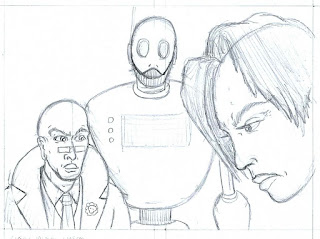 Next this is the inked and hand-lettered version that appeared in the ROBOTS anthology: 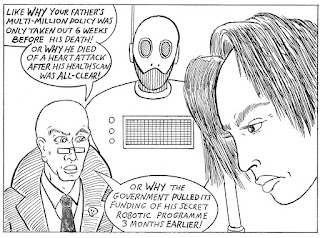 The original inked art was re-scanned and cleaned before lovely colours were added by Moments of Adventure: Collection One collaborator, Aljosa Tomic, (based in Serbia no less!): 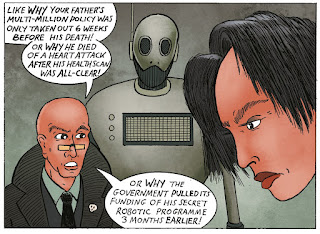 The hand lettering was then carefully removed from the newly coloured art: 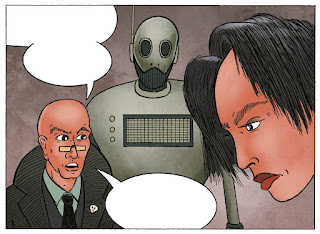 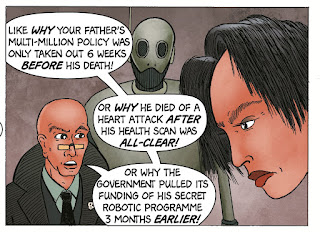 And there you have it, what a difference from the original with the colours breathing wonderful new life into the art which hopefully  enhances the whole story. It may all look rather simple but sadly it isn't, I can't speak for Aljosa but my computer skills aren't the best and lettering on top of existing lettering and balloons is as finickity as it sounds. Necessary adjustments had to be made to both the text and balloon placements in the above panel, including 'colour paste-ups' to hide the originals, a process which sadly had to be repeated on virtually every panel on every page of the strip!

Much as I love hand-lettering and placement of it on the original art to form an integral part of the page and story, I no longer use this technique as I know the difficulties it can cause! Plus the flexibility and legibility of computer lettering - once mastered - is really second to none!

We're getting there and I'll look forward to sharing more as the whole second collection of Moments of Adventure is built and ready for release, hopefully reasonably soon! In the meantime copies of the first collection are still available to buy from me at conventions - see list to the right - and direct from the Accent UK website here.
Posted by Colin M at 13:40 4 comments: 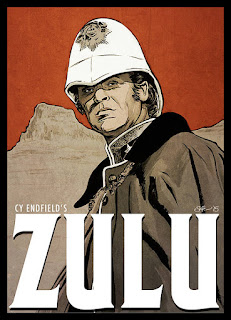 While I remain busy with comicy things, here's a wee reminder of the splendid art being produced by Matt Soffe who coloured some of my Moments of Adventure comic strips and my - still progressing - Zulu War graphic novel and of course many Accent UK covers.

As well as colouring though, Matt is extremely talented at producing his own art in many different mediums and his site of prints and images is well worth a browse and you'll be sure to find something of interest for you or a gift for a friend! Check his webshop here.

I'm fortunate enough to own the original of Matt's Michael Caine Zulu image above, which I commissioned from him as a pin up in the aforementioned forthcoming Zulu graphic novel, but he's also produced similar striking images from many other movies and genres, enjoy!
Posted by Colin M at 15:37 No comments: 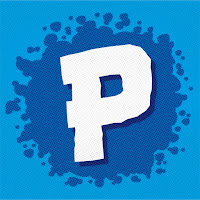 The indie-centric website Pipedream Comics has a nice catch-up review of some of Accent UK's recent and current titles, check it out here!

Pipedream themselves have recently published a new issue of their 'Pull-List' indie news & reviews magazine which is always worth a look, reminds me a little of the old RED EYE that we once published with Barry Baz Renshaw as editor-in-chief back in the day! 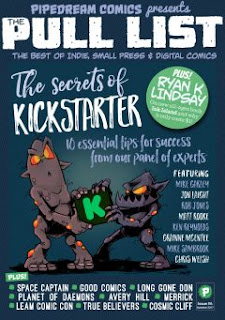