The Accent UK tour bus is revving up once again to complete 'Colin's Celtic Comic Trilogy Tour' with this weekend's Granite City Comic-Con in Aberdeen!

Can't believe its a whole year since the last Aberdeen show but there we are, although in some ways its come round a little too quick as my planned launch of the second Moments of Adventure collection is sadly not quite there. That's the problem sometimes with doing a large number of shows, there's no time to make the actual comics!

Having said that I have been busy producing some new sketches to go in the special Moments print packs: 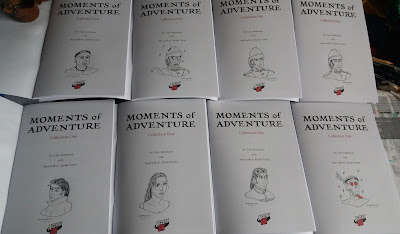 ......and there are still several new Accent UK titles since our last Aberdeen appearance.

So if you happen to find yourself in the North East of Scotland this weekend why not visit Granite City Comic Con, enjoy the fun and say 'Hi' to us. 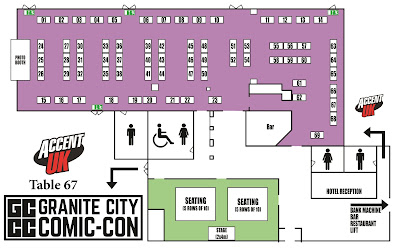 Enniskillen - it was all about the Comics (and Subbuteo)!! 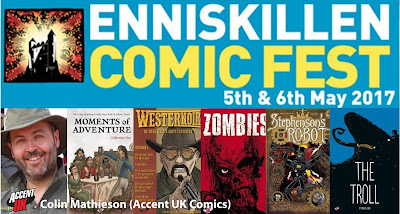 Hard to believe that its already a week since I set off to the second Enniskillen Comic Fest but here I am back in wet and windy Manchester after a whirlwind weekend in the South West of Northern Ireland. The whole trip was hugely enjoyable and took me to parts of NI I'd never been to before and the freedom of hiring a car more than justified the costs.


Having a car and a reasonable knowledge of Belfast from recent visits meant I was soon whizzing my way round the city and parking up to have an Ulster Fry the early flight demanded at the delightful Spires centre. We'd discovered the Spires cafe during one of our first Belfast visits which coincided with the opening of the adjacent Comic Book Guys comic shop which I always try and visit. I caught up with Flanagan senior, Daniel for a good catch up on the shop's imminent move (following the Spire's planned redevelopment) to newly fitted premises further up Gt Victoria Street, and also later with Aaron, who was also going to Enniskillen. 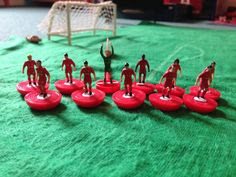 Then it was back in the car and as I was still ahead of time an unplanned stop - prompted by losing a tooth! - I ended up by Portadown Football Club's Shamrock Park ground! This was quite a moment for me as years and years earlier as a wee boy I'd 'adopted' Portadown as 'my' football team as they played in the same red as my hometeam, Aberdeen. Our basic Subbuteo set only came with a red and a blue team so when we were bored of playing Aberdeen against Rangers, we looked for alternatives and (of course) I chose Manchester United and also Portadown with no real understanding of who or where they were. I had a Portadown fixation for a wee while afterwards even inventing my own football team and making football cards for them but that's a story for another day (I think I was only 9!), so for me standing at the ground was really something special! 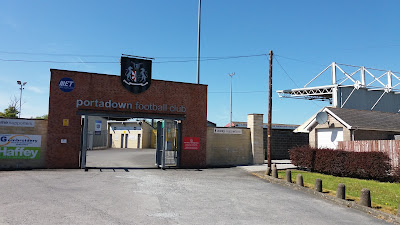 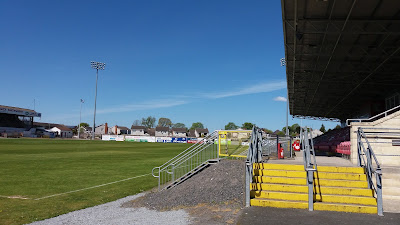 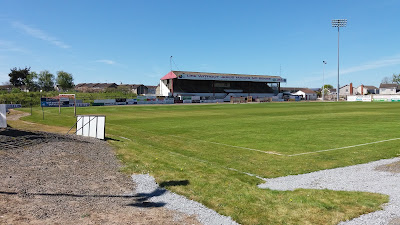 With my little detours I arrived at sunny Enniskillen late afternoon and soon found the impressive Enniskillen Castle Museum where the event was to take place. I quickly popped in and the very helpful caretaker, (also Colin), showed where I was likely to be but they still had a bit of setting up to do when the museum closed so I left to check-in at my B&B and grab a bite to eat. It was a little odd having tea on my own but I was tired after my early start and grateful for a bit of 'down time'. The Fest had organised a special 2000AD event at a local theatre that evening which I understand was very successful and busy but I was happy with an early night.


The following day after another big breakfast fry I headed to the castle and met Paul Trimble the busy event organiser and his team of volunteers and was soon set up in the visitor centre above the museum entrance. It's always a little strange when you set up in a new unfamiliar venue but any worries soon passed as I discovered that I was to be in the same section as longtime comic buddy, Jenika Ioffreda, who in fact was the one who had recommended the show to me after guesting in its debut last year. Also in our little snug (or greenhouse as some referred to it) were artists, Ian - Rico - Richardson, Davy Francis and one of Scotland's comic legends Cam Kennedy who with his wife, Isobel were a delight to chat to all weekend and get my copies of the Kidnapped and Dr Jekyll and Mr Hyde graphic novels signed!. 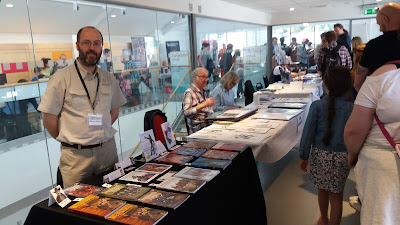 Close by too were John Wagner with Rok of the Reds artist Dan Cornwell and the hard working Carlos Ezquerra who had a huge queue all day long, popular chap. This was, truth be told, the only real downside of  'flying solo' while both being a comic fan and exhibiting your own work. You can't sneek away from the table to join a queue for signatories and if you do, then you potentially lose sales so its quite a dilemma. In this case, my travel, accommodation and car hire costs necessitated that I stay behind the table as long as possible which I did until very late in the afternoon when I finally had my first cup of tea and snack of the day, forfeiting the chance to have writers Alan Grant and Alan Hebden sign the books I'd brought and missing out on Steve MacManus book which I heard had already sold out very quickly. 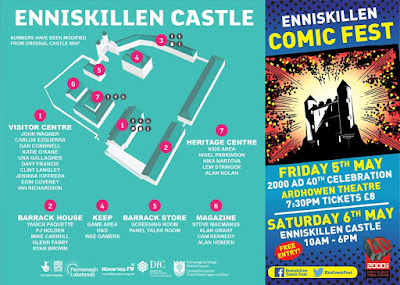 Don't feel sorry for me though I had a great time chatting to the many interested attendees who filed past my table. The event was free admission and had been well advertised locally so, despite the glorious sunny weather outside, there was a fine steady stream of visitors all of whom were interested in what was going on even if not active comic readers themselves. This is testament again to Paul and his team in making the event 'all about the comics' so folk could see and experience actual comics themselves and not be distracted by the merchandise and pop culture noise that can sometimes dominate events.

I did though also venture out early doors, shortly after the event opened for the 'Breaking into Comics' panel which I was pleased to be on along with the aforementioned Jenika, Grainnie McEntee and Ciaran Marcantonio, ably hosted by writer who draws Andy Luke who is one of the few folks out there that can beat Accent UK's independent comics pedigree, being a late 1990's inductee compared to our early 2000's! It was a fun wee panel and I think covered a lot of informed ground for those attending - with its early start, the panel gathered more and more attendees as it progressed which was satisfying to observe. 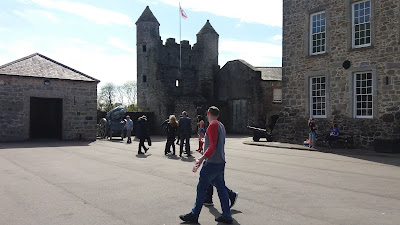 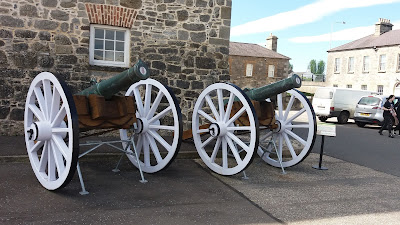 I did make one very quick run round the site as the charity auction commenced which was a signal for most folk to pack up and was rewarded in catching up with Danny McLaughlin and Nathan Donnell of Revolve Comics , Steven Young and Richard Davidson of Back Pocket Comics, Tim Stampton and David McDonald so as well as catching up on the Irish scene managed to at least grab a few new comics to add to my Cam Kennedy signed ones. 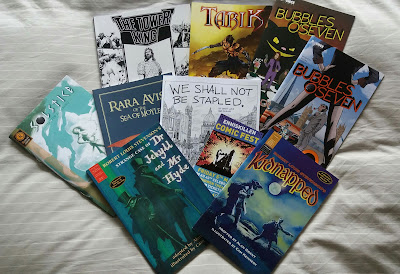 That evening, after I'd dropped off the hire car I had a splendid evening at a downtown bar where the guests, creators and fans had gathered for a wee drop of food and some good old fashioned Irish craic and that, together with the chats at the show with fellow creators and visitors helped remind me what a strong welcoming inclusive community, comics are. So despite the show not being an economic success for me, I had a super time and had a big warm smile on my face as I drove through the sunny countryside the following day, slowly making my way back to City airport.


If I can make the numbers work I would dearly love to return next year and again be part of something which "Is all about the comics!".

Off to the Emerald Isle! 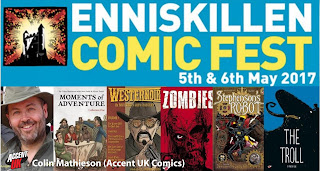 The next part of my Celtic Comics tour is a real step into the unknown heading deep into Northern Ireland for Enniskillen Comic Fest! I'll be flying into the almost familiar Belfast City Airport then hiring a car to get to Enniskillen which seems the simpler option than the 3 hourly buses!

The show itself promises to be special with an official 2000AD 40th anniversary status so wish me luck.
Posted by Colin M at 21:58 No comments: