From the vaults, please enjoy these 'naked' Accent UK comic covers for Hallowe'en ! 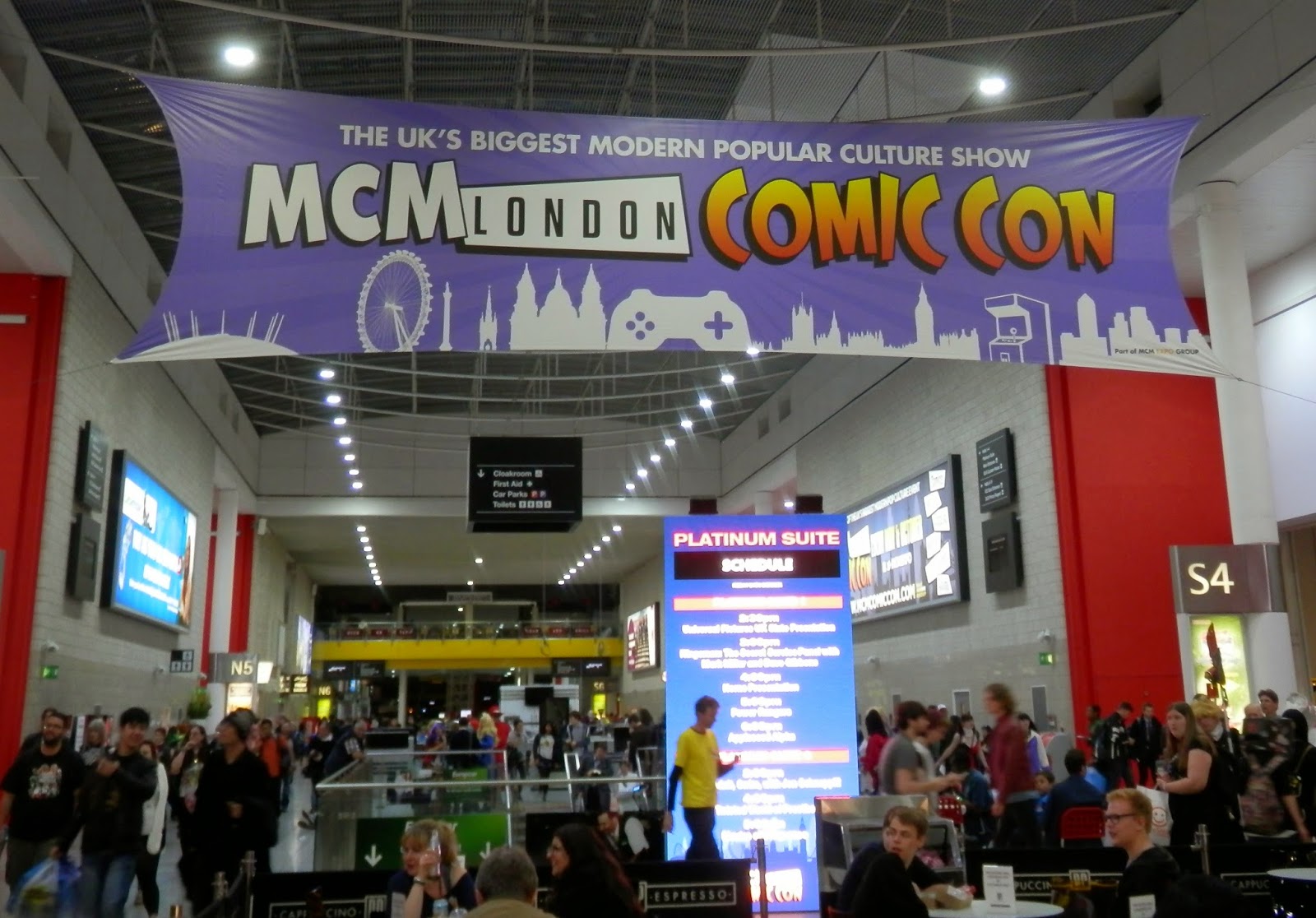 Well that was fun, Accent UK returned to London's MCM Comic-Con last weekend and had a pretty cool time. Our appearance at the earlier May show produced record sales and really opened our eyes to the behemoth that these shows have become. This time felt busier and its since been confirmed that some 110,000 fans flocked to the Excel centre, which certainly explains the epic sandwich queue!.


That said, we were a little down on sales, selling just over 75% of May's record and at times, despite the crowds, the Comic Village felt a little quiet. This is probably explained by the fact that the show has grown even bigger and, I think, used at least one more of the Excel's huge exhibition halls than last time. This, like the recent MCM Manchester show, is actually a welcome move, allowing more space for people to move round so there are less of the problematic 'bottleneck's early MCM's were known for. However there is just so much to see now that it is a challenge to get round it all and of course, fans have limited funds so can't buy everything they see, even if they want too.


This was pretty noticeable in the Comic Village where more so than last time folk wanted to have a good look round first before committing to buy and who can blame them, with so much to see.  Thankfully we had several folk who did just that and returned, some even after queueing at the crowded cashpoint machine to ensure they had money for our books, which we are very grateful for.

We also had several returning readers who had picked up and enjoyed our books for the first time at the May show and wanted to see what else we had so again thank you!  Actually this, bizarrely, may also explain why sales were down from last time as in fairness we had no new books to offer since May. This may also be the reason why there were several exhibitor notable absentees from the May show, who without new product, may have decided to skip this show in the increasingly crowded UK convention calendar? Although sales were slower than May, they were still our 3rd highest ever, comfortably above our previous best ever figure from 2010, so we're certainly not going to complain!


But as happens, this opens opportunities for others and our immediate table neighbours were all, I think, first-time MCM exhibitors; Charlotte Franks 'Made by Anxiety', Lissy Raine 'Lillyluft' and Elizabeth Querstret, a fine friendlier bunch you couldn't hope to meet! There were many others so apologies if my geriatric head can't recall all the names or website links! Actually, amongst Rich Johnston of Bleeding Cool's prompt MCM reporting is a pretty comprehensive file of all Comic Village exhibitor tables on the Friday afternoon here  so you can see some of the awesomeness for yourself!


Rich's photos were from early Friday afternoon just after the show opened when Scott and I had barely arrived and were still unloading the car. We'd had a reasonable drive down but things always take longer than you think so it was a wee bit of a last minute panic to get registered, wristbands, parked, located and set up but that was down to us not the excellent organisation I hasten to add. Although vowing to leave earlier 'next time' I may not need to as MCM announced that next year's London shows will be over 3 full days, presumably meaning Thursday set-up's where in theory you have all day to drive down and unload etc. While this makes perfect sense for the show I didn't really get a chance to discuss this too much with fellow exhibitors and punters so we'll see how this goes. Our Friday afternoon sales were pretty modest it has to be said despite there being pretty good crowds - maybe between 6,000 and 10,000? Well, Mr Harry Potter himself,  Daniel Radcliffe was there don't you know!


There was actually quite a full programme of panels, talks, media announcements etc which took part away from the show floor in various conference suites that the Excel offers. I don't know if this was a new aspect of the event but helped keep those queues and disruptions to a minimum even if it did mean that sadly we didn't get to see anything. I believe that as well as Mr Radcliffe, Brian Blessed and comics giants, Mark Millar, Dave Gibbons - and Accent UK contributor! - Kieron Gillen were also in attendance but I failed to spy any of them on the show floor afterwards.


Everything else went smoothly, Scott and I caught up with Time Bomb Comics Steve Tanner who we had arranged to share a Greenwich apartment, being as the Excel hotels had either sold out or got incredibly pricey. It's always good to catch up with Steve and share recent comic show experiences etc and find out about the brand new Birmingham Comic Festival next year that he's co-organising, and we're committed to attending.


Dave and Jemma arrived by train the following day - after Scott and I had done all the hard work setting up it has to be said - and a jolly time was had by all! Accent UK has always been a bit of a family affair but it is a real delight to Dave and I to be able to regularly escape the table for a look around or a cuppa, knowing its in good hands, so thanks Scott and Jemma for your hard work, although both of you probably did your best to spend as much at the show as we took in!


Socially we were pleased to also catch up with long-time friend and comics guru Chris Dingsdale who joined us and Steve for a meal and a few Saturday night beers and then that was more or less that. There were several other fine folks we caught up with at the show, including Jenika Ioffreda who was launching her delightful Vampire FreeStyle collection, Gary Erskine, set to go on the much anticipated RollerGrrrls comic, Jeremy Biggs's mighty expanded Subversive Comics line and the irrepressible Stuart Gould.


We've really embraced the MCM series of shows and by combining them with carefully chosen, more 'traditional' comic shows Accent UK have enjoyed our most successful year ever! So thanks to all concerned and we will definitely return next year with plans already made for a bigger Accent UK MCM presence!


Okay so I have been 'quieter' in recent times but there is a reason, or should I say 'reasons' , as apart from a wonderful wee anniversary trip to Belfast with Mrs M and a few other domestic activities, I have started on my next comics project, which not surprisingly involves........Zulus!

You may have seen that, much to my surprise, my remaining Zulu: Water Cart Rescue comic packs have gone well this year, selling out at comic shows in Birmingham, London, Belfast, Glasgow, Manchester and finally Helsinki where my last 3 packs all quickly went!


This has greatly surprised me, given the age and subject matter of the books, but it seems that there is always interest in Zulu, which I guess the movie and of course Michael Caine have had a lot to do with. So anyway hastened by my Helsinki success and the encouragement of Dave West and Gary Crutchley I have seriously embarked on a project to collect both ZWCR issues together into a single volume with a 're-mastered' theme of new lettering and (hush) colouring and a brand new back-up strip which directly links to the original issues!


Originally I was going to include my Day of The Dead Moon strip from Accent UK's sold out Zombies anthology book but fond as I am of this strip, the fantastical zombies theme doesn't really fit into Water Cart's intended historical accuracy - its based on a true event - so zombies were dropped and I therefore needed something new.

Instead I've returned to Rorke's Drift and its aftermath and plan to tell a short story from the Zulu's perspective, hopefully incorporating themes (and maybe characters) from the original series. This is only planned to be a short 8-10 page story so we'll see how it develops. For all those interested in my comic work, you'll hopefully be pleasantly surprised by this news and no doubt even more amazed if I get this finished!


The new story, along with both ZWCR issues and some bonus features will form the remastered Zulu Collected Edition, hopefully appearing in time for the 2015 comic convention season.

I've had a few false starts recently with my own comic story-telling and have several projects just waiting to go, so I really hope this will be the one to get me going again. Let's see, but in a hopefully fortuitous omen, Zulu the movie was on TV today, the day that I finished page 1's pencils JABULA!


Little quiet here perhaps but Helsinki was excellent, check out Dave and Gary's timely reports, mine still to follow! Things are going on though in the background including a new project and planning for our last couple of comic shows for what has been an exceptional year for Accent UK so far.

Our last show of the year will be of course be Thought Bubble in Leeds which is certainly the most prestigious of UK shows with the cream of indie comics talent (and us) on display and before then just before Halloween will be our speedy return to London's MCM Comic-Con. Our attendance there way back in May set a new all time Accent UK sales record which amazingly was subsequently broken, so there are high hopes for this one. We will be there on the shows first day, which is the Friday when we will be joined by none other than a certain Harry Potter star, Daniel Radcliffe who will be promoting his new movie, Horns!