Just a quick mention of an unexpected comic bonus from my Dundee Comic Expo trip when avoiding our usual motorway service station stops, we instead stopped for lunch at the newly refurbished Bannockburn visitor centre near Stirling.

Mighty impressive the centre looked, befitting for the forthcoming 700th anniversary and is one we will defiantly plan to visit properly when we have time, maybe as part of this year's Homecoming festival?. However my wee foray into the gift shop provided unexpected dividends when I discovered that the much anticipated Battle of Bannockburn graphic novel had been released and was on sale!

My excitement stemmed not just from my natural Scottish historical and comic connections but from the fact that the book's art is provided for by the talented and very good friend of Accent UK, Conor Boyle! I first heard about the book over a year ago from Conor and his wife, Lizzie, (of Disconnected Press fame!) and had short updates as we bumped into each other at last year's comic shows. I've not seen them so far this year so this was indeed an unexpected find and one i look forward to reading.

The graphic novel written by historian Fiona Watson comes partly in colour and 3D no less and can be purchased direct from the National Trust for Scotland's website here. Good luck to all involved with its production. 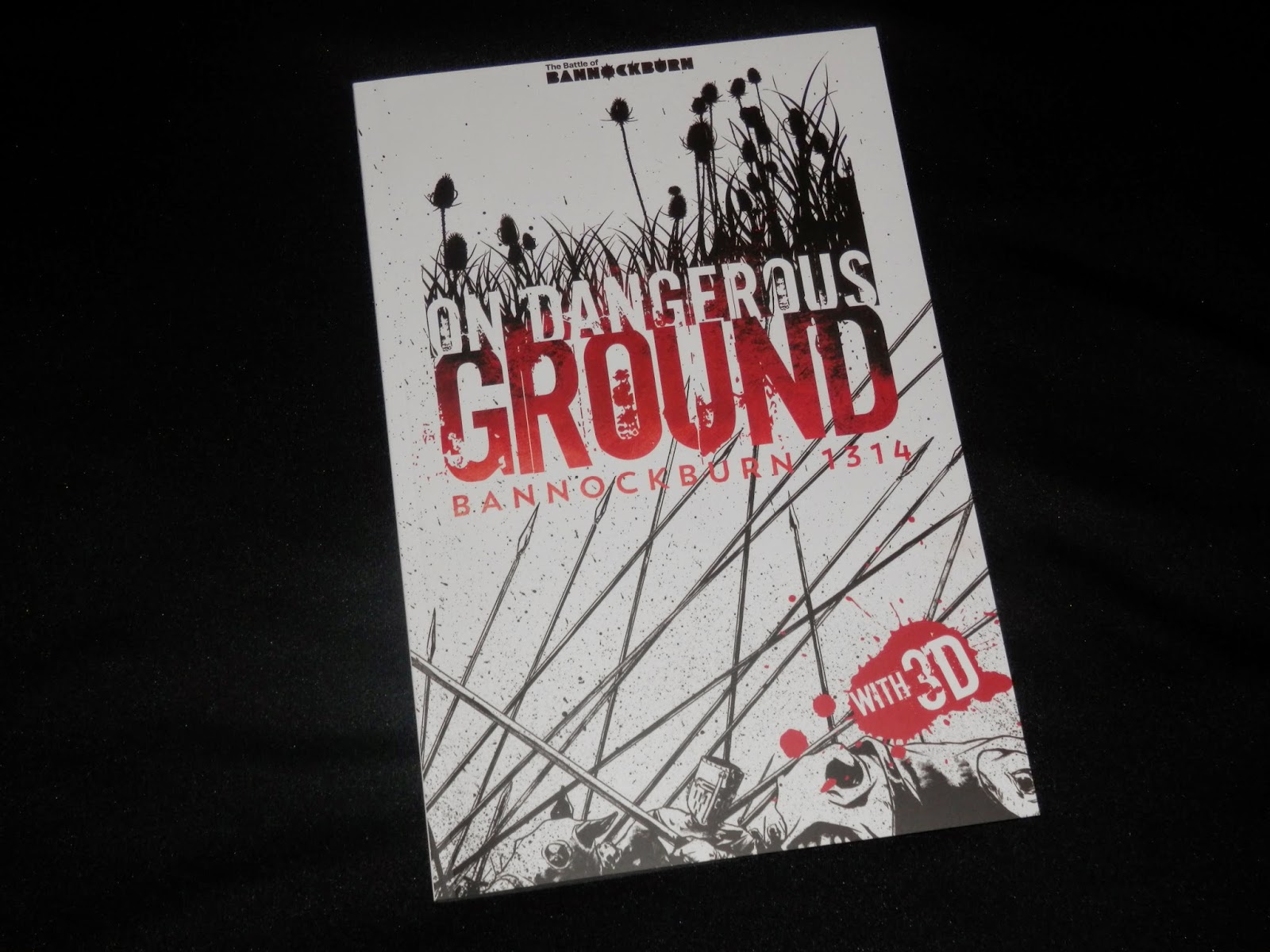 Aye, Aye fit like? Oops sorry gone 'all Doric' after being home for the Dundee Comics Expo - that's what happens when Gentleman Dave isn't around with his Earl Grey tea!

Anyway I'm glad to report that the Dundee Comic Expo was a good one with decent sales for Accent UK, actually selling more books than the year before so quite happy. This may have been down to my son Adam's keen promotional skills as he joined me on the table for the first time since last year's amazing Glasgow MCM, but probably was more to do with the joint manga/anime event taking place across the quadrant, Dee-Con, which attracted big crowds which were shared across both venues.

Actually next to the beast that was Dee-Con, the Comic Expo was a modest affair with less exhibitors than the year before and no 'big' comic names in the way that Bryan Talbot, David Lloyd, Gary Erskine (and others) had previously provided. There wasn't a huge attendance but rather a steady flow of folk which made for a nice relaxed stream of browsers and buyers. Many were new to Accent UK but there were also returning readers, so the show was great value to us in showcasing our books north of the Border.

The University of Dundee's Chris Murray and Phil Vaughan deserve great praise in organising and setting up the Comics Expo. They ensured that the cream of Scotland's independent comic creators were there in abundance including Black Hearted Press, Planet Jimbot, Rough Cut Comics and Team Girl Comics alongside D C Thomson's Commando and Glasgow's Plan B shop and others. It's a shame that their fine programme of talks and panels wasn't better attended but that was probably just a symptom of the casual flow of visitors into the expo making things seem a little sparse at times.

Being based 'doon sooth' I'm still finding my way round the Scottish comics scene so was pleased to have time to chat to many of the other exhibitors especially the likes of Jim Alexander who I've met a few times now and like me had his son there to help him out!

Our table neighbours were new to me, Treehouse Comics, a recently established Dundee based collective who have already released their second anthology title, called of course Treehouse issue 2! They were a fine friendly bunch with 4 or 5 of their creators in attendance playing table tag. It was enjoyable chatting to them and hearing their enthusiasm and I'll be very interested to see what they come up with in the future.

I also caught up with Graham Neil Reid and Jeremy Briggs, Allan Lowson (of Back Street Heroes biker magazine fame), and a few others which is always fun and another valuable part of these shows. Adam's help meant that I wasn't stranded behind the table as I'd largely been the year before but the friendly relaxed atmosphere encouraged lots of conversations but maybe that's just the Scottish friendly nature?

To my delight, my Zulu:Water Cart Rescue comics again sold well and I was even asked to do a special Zulu themed sketch of Winnie the Pooh which I enjoyed doing - thanks Kirsteen! Actually my Zulu comic stocks are now very much depleted so I am seriously considering a reprint to bring both issues together in a single volume? Of course I also desperately need to produce something new which an event like this always inspires me to do, so let's see what I come up with. I think maybe that July's Glasgow Comic-Con is a realistic deadline to aim for finishing one of my in progress projects....

Anyway thanks again to the Dundee Comics Expo team, I hope that they were as pleased with the day and that it becomes the regular comic event that Dundee deserves. Thanks also to Adam for his fine company and for taking the day's photos!

Well we're truly in the comic convention season now with Accent UK getting set for a return to the Dundee Comic Expo this weekend! The date's been known for a while but confirmation's have only recently been made but I can't wait. I really enjoyed last year's show, (see report here!) and this year promises to be a little different being a joint show with the manga/anime focused Dee-Con.

This will again by a solo comic show from me but I may be accompanied by youngest son, who is currently studying in Scotland but I'm looking forward to catching up with the talented bunch of Scottish creators that I'm getting to see on a more regular basis now.

Speaking of Scotland, we're now also confirmed for a return to Glasgow for July's Comic-Con. We've also applied for our regular table at Leeds Thought Bubble which hopefully, under their new revised registration system will avoid the frustrations and uncertainties of last year. Less positive we won't be returning to this year's The Lakes festival as our application wasn't accepted which we're told is a symptom of the venue being small and heavily over-subscribed, so you can't win them all.

Actually looking at last year's record breaking event calendar, we are only planning to return to 5 of the 11 shows attended in 2014! Some such as Copenhagen Comics, (and presumably Carlisle's Mega-Con?) aren't being held this year, others like MoCCA, (held this forthcoming weekend too!) and the London Super Comic-Con are down to economics while as mentioned we've been declined for The Lakes, so a few changes.  Its perhaps a reflection of the current healthy number of comic festivals, that all 6 of these shows will be replaced with several new (to us) ones planned, so quite exciting really.

At the moment, we have no overseas shows confirmed, (unless you count Belfast!) but are currently in communications for a show in a country we've never ever visited before which is exciting, with another under serious consideration, so we'll see. Just need to work on a few new releases to follow WesterNoir Book 4's earlier successful launch...... 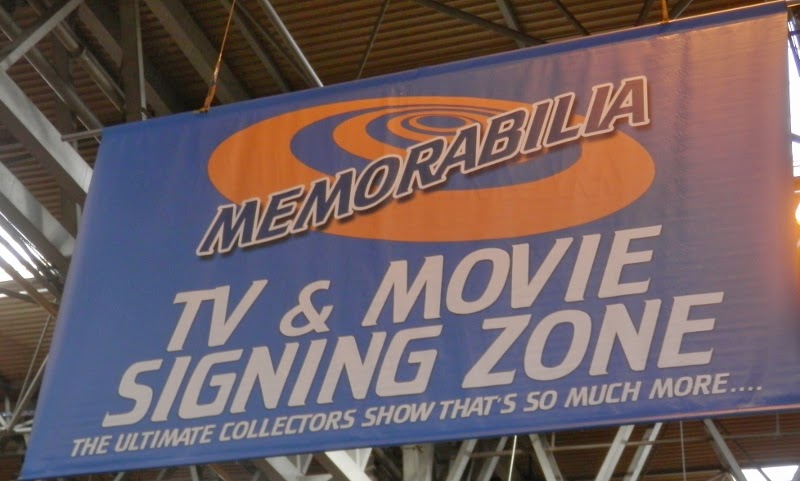 Ah, been  a really hectic week or so since Accent UK's appearance at the Birmingham NEC's MCM & Memorabilia show so here's my review of the show.

From a purely comic sales perspective the show was a little disappointing. After last year's MCM madness in Glasgow and Manchester we had high expectations, but in the end only sold about 1/2 as many books as at those one day shows, so with Birmingham being a full weekend, it was disappointing.

Chatting to folk it was hard to pinpoint reasons why, the attendance itself seemed busy enough and comparable with Glasgow and Manchester but the comic village didn't seem to get the same footfall that those shows had. It reminded us of the early MCM London shows we tried when the thousands of teenage cosplayers didn't seem too interested in the comics side of things - something I understand that London has 'grown' out of as its attendance has since soared and comic village regulars enjoy brisk trade, (something we will test for ourselves when we return to London in May!).

I understand that this Birmingham show is a different beast to others in the MCM stable in that it has Incorporated the long established Memorabilia shows which ran for many years. There was evidence of this both in the media star signings and the dealer hall with various toy, book, magazine and vinyl record dealers amongst the regular MCM roster of manga, prints, t-shirts, accessory stalls etc. I think Dave and I rather enjoyed this eclectic mix of dealers with some unusual finds amongst the many stalls - old Lion annuals for Dave and a couple of Zulu movie lobby cards for me!

It may be though that the comic village hasn't yet matured in its own identity within this varied show and struggled to make itself heard. There were some 'hotspots' though with a couple of comic exhibitors doing well but for the majority it was pretty modest stuff.

As always though it was still a very enjoyable time catching up with old and new friends including Steve Tanner of Time Bomb comics, Paul Birch of the Birmingham Mail's Speech Balloons column, Lou aka Naniiebim, Rudra and Lyndon White, (whose promising Cosmic Fish comic is imminent!), Jeremy of the popular  Zombie Bear Comics and of course the irrepressible force that is Stuart Gould of UK Comics Creative.

As we had the capable Jemma and Scott with us, Dave and I took the opportunity for a few wanders and a coffee to reflect on where we are with Accent UK - something we of course regularly do - but we've had a growing feeling that we're a little 'muddled' in our own identity, possibly mirroring the MCM/Memorabilia's own identity crisis! We also had some valuable constructive feedback from folk we trust so are mulling these over at the moment and hopefully will implement a few positive changes going forward. Nothing overly drastic, maybe just a timely 'resetting' of where we are and what we want to achieve, mmm well that does sound rather drastic and serious doesn't it - anyway I've asked Dave to keep all this under his hat for now............