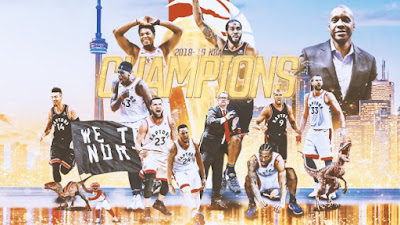 Wow! Go Raptors Go! NBA Champions for the very first-time in their history!

While I'd be the first to admit to not being a big basketball fan or really following the sport, I can't deny that Dave West and I fell a little in love with the Toronto based team during our visit there for the TCAF, comic art festival last month.

We caught a couple of their regional play-off games against the Philadelphia 76ers including their captivating last second 'basket bounce' victory in a wonderful atmospheric bar where the entertaining bar manager kept us informed of not only what we were witnessing but also their history. It seems that the Raptors are 'serial chokers' when it comes to the big games and regularly put their fans through torture before failing to deliver yet again.

This time was different though as Dave and I were there to add our considerable support and expert knowledge on the sport - well what an Englishman and Scotsman don't know about basketball isn't worth knowing frankly :) So when Leonard's winning shot went in, the bar and Toronto exploded in emotion as history was made. The following day was our last before flying home and it was clear what the victory meant as Toronto was buzzing, so much so we went in vain to buy shirts as a souvenir - demand had meant stores had run out of our sizes!


It worked and not only did they put those Pesky 76ers to the sword, the Raptors continued to progress through the seemingly endless regional play-off finals until the Big One, the grand final against the fancied San Fransisco Golden State Warriors where last night, history was made with the Raptors finally delivering on their promise and it seems Toronto and maybe much of Canada went wild with this long promised but tantalisingly distant victory. 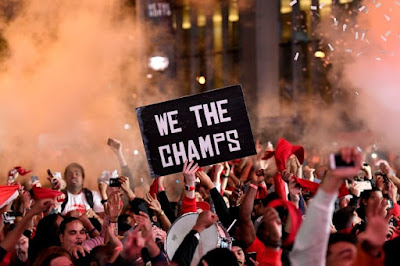