Well that was more like it! I'm pleased to report that last weekend's new Ox-Con, (the Oxford Comic-Con), was a success for all participants. Within the stunning historic examination school buildings, comic creators, authors and actors mingled with comic fans, cos players, families and bemused Oxonian academics as comics came to town.


This was perhaps a more modest show launch than perhaps we'd seen elsewhere - no huge snaking queues here - but perhaps it reflected the quiet efficiency of the organisers and Oxford itself. Signage was largely absent but didn't seem to matter as social media & word of mouth had insured that the show had sold out of tickets in advance so there was minimal 'walk in' opportunity.


The advance sales had also been carefully organised into early bird and general admission with a two hour gap between ensuring that there was a gentle stream of people making their way up the impressive stairwell to the two oak panelled vendor rooms, with talks taking place below.


People seemed quietly relaxed about the show, taking their time to study the stalls and options before carefully making their choices, meaning you soon saw the same people make their way round several times before making their purchases. That though was the immediate difference compared with our recent Bolton experience, people were genuinely interested in comics and wanted to find out about them before deciding if their interest was piqued enough to buy, meaning that we had a steady stream of browsers and purchasers from the start.

Although the show was a sell out, the numbers had been restricted by health and safety requirements to 'modest' levels, meaning that, with the rich variety of talks and attractions on offer, the halls did regularly empty with the crowds ebb and flow.

This was fine though, given us frequent chances to nip out for refreshments, (one downside with using a historical building is that no hot drinks were allowed inside!), and to catch up with familiar faces, like T-Pub's Neil Gibson, Mild Frenzy's Iqbal Ali and Richy Chandler amongst many new folk who were also pleased with the way the show went.


The pauses also allowed us to enjoy the great soundtrack provided through the school's speakers, a carefully curated play list of contemporary music and movie themes which caused many impromptu dancing and movement between the aisles - don't worry those pics are staying hidden!

So an enjoyable show and although sales were slowly steady, given the attendance restrictions, we were pleasantly surprised to see that we had in fact done pretty well for a first-time show and had indeed covered our costs - despite Oxford City Council's best efforts with outrageous parking charges and aggressive traffic cameras!


We understand from the organiser's that this was a bit of a trial for both them and the building's trustees and that plans are already underway to open up more areas to allow for a bigger show next time, increasing the attendance restrictions. On this basis, and providing the dates don't clash in the crowded convention calendar, we will gladly return, and review our assessment on Ox-Con's pass mark which on it's 2016 intake, I would award a respectable 2.1 :)

Accent UK are revving up their tour bus again for this weekend's 'Ox-Con' in, of course, Oxford!

It's been years since we've  been there for comics but we've fond memories of the 'homely' Caption small press gatherings at various tranquil locations in Oxford but this promises to be something very different.

It's the organiser's first time but they're doing their best to make it memorable, taking place in the famous historic Examintion Schools (does this mean we have to do a test?) for starters and a good mix of comic folks, exhibitors, cosplay and media guests so hopefully will be good. They've even got an unique 'Oxford' spin on the programme of talks with a decidely more academic leaning than what perhaps we normally see, with physics, globalisation, alienation and redemption among the usual superhero and 2000AD  topics!

Here's the floor plan with Dave and I parking up at Table 9: 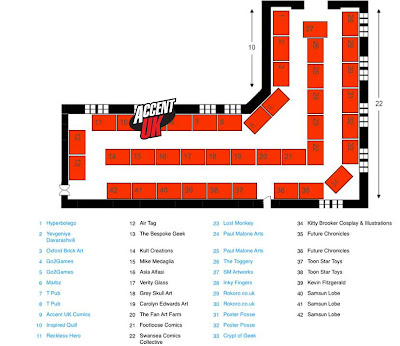 Following the recent Bolton, we're on a run of new (and new to us) shows coming thick and fast with MCM Liverpool and The Edinburgh Comic-con coming shortly after Oxford, so we'll see how we do, there's even rumours of someone having a new comic at one of them? 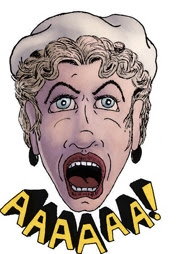