Well if you've already picked up Moments of Adventure: Collection One, you'll have been introduced to a certain Cornelius MacBeth who may just be having a bad day - see above! If you don't know who I'm talking about then you can grab yourself a copy direct from the Accent UK website here or make sure you catch us on the comic convention circuit next year.

Mr MacBeth is one of my oldest comic characters, created a long time ago, so I have been particularly pleased that many folk have picked up on him and let me know that they particularly enjoyed Come and Buy My Toys, the story he features in Moments of Adventure, and are intrigued to find out more.


I have several further adventures planned and plotted so hope to have a dedicated comic for our Scottish Napoleonic Ghost Hunter in the near future, just don't hold your breath quite yet! I can confirm though that a further short story featuring Macbeth will be included in the forthcoming second Moments of Adventure Collection! This story is called Neighborhood Threat (yes that is the American spelling!) in which MacBeth has to decide whether a wrongdoer is ready to face the consequences of their actions.

This story has again been expertly coloured by Serbia's finest, Aljoša Tomić who has a very sympathetic palette for our hero. Find out more when the issue is released in early 2017! 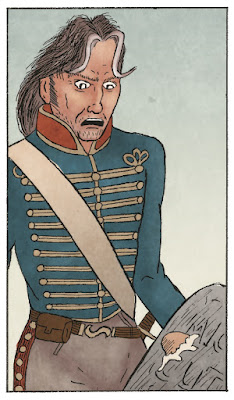