Well today Scott and I finally had a chance to add our voices to the chorus of congratulations and farewells to Sir Alex Ferguson and Manchester United, following his announced retirement and the team's clinching of a record 20th League title!

Fergie of course has been in charge at Old Trafford since November 1986 after enjoying unprecedented success with Aberdeen, my local team. I followed shortly afterwards, moving south in March 1987 at a time when United had the likes of ex-Dons players Gordon Strachan and Jim Leighton so of course there was only one English team I could possibly support!

With a young family and living in North Wales, I was a committed armchair fan although we had enjoyed the Old Trafford stadium tour a couple of times. It was though shortly after moving to the Greater Manchester area that, in November 1997 with the boys, we attended our very first match, a Champions League game against the mighty F C Kosice of Slovakia, with the likes of Schmeichel, Pallister, the Nevilles, Beckham, Giggs, Scholes and Sheringham.

The match finished 3 nil to United and we were away! We've been lucky to have gone to a few matches most seasons since and have never seen United beaten! Highlights include seeing the thrilling 3-3 Champions League draw with Barcelona, attending matches from each of the 1999 treble winning competitions, Ronaldo doing his stuff and of course Fergie giving us a wave!

There's many, many more memories of course but with Fergie's retirement we were keen to attend tonight's victory parade and salute both the team and arguably the greatest manager this country has ever seen. As you'll see in the pictures, Old Tafford and the parade route was totally packed, the atmosphere electric and despite the threat of rain in the air, this was the place to be. Scott and I had attended the treble parade in 1999 which was very special but this was another level altogether.

So Congratulations United and Thank you Sir Alex for all the wonderful memories! 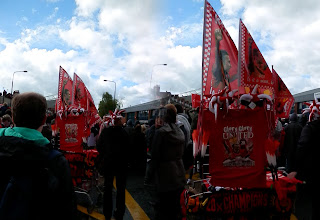 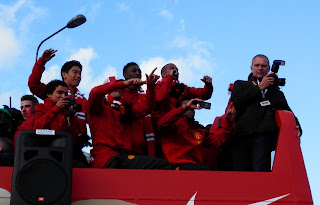 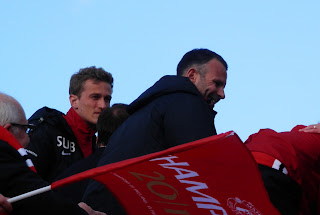 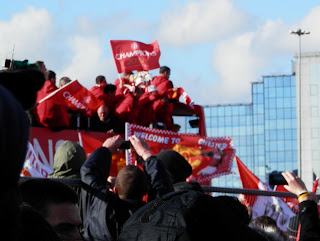 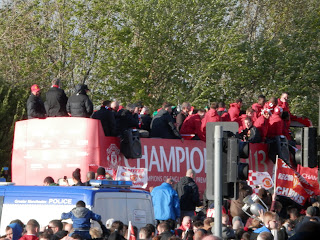 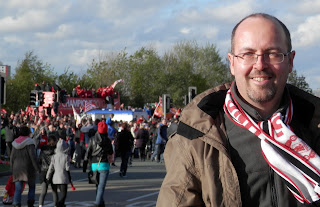