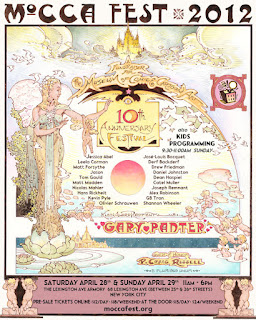 Hi all and welcome to my first blogpost, inspired by the very fine moments enjoyed at this year's MoCCA comic festival in New York! 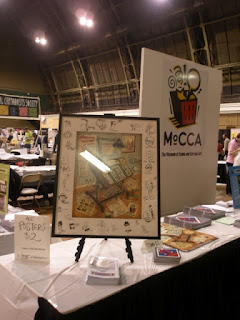 This was Dave West and I's second year exhibiting under our indie comic banner Accent UK accompanied by Scott my eldest and able assistant. Dave's already written a very fine report on the event at Accent UK's blog which you should check out so I'll just briefly highlight a few of my own personal moments.

We were again located next to our comics buddy Cliodhna Lyons who is great fun and seems to know everyone comics-wise in the US and UK!. It's really down to Cliodhna's enthusiasm for MoCCA that persuaded us to attend last year's show so it was great to catch up with her again and a bit strange being as we'd only chatted the week before in London at the Comica Comiket show! This year Cliodhna was joined by two US chums and talented artists Chris and Jazz who looked out for us, helping explain why I'd received a 'biscuit' with my chicken nugget takeaway and a few of life's other mystery's!

Joining us in our little 'UK Hub' was John-Paul Kamath and his fine London Horror Comic which was making its US debut and seemed to be well received.

The show did seem quieter than last year although we had a steady stream of visitors to our table where we had a fair few new books including the newly delivered Westernoir which has already received its first review!

There was more of an international feel to things with many of our good Danish friends returning alongside contingents of Swedish and Finnish comic artists and a fun bunch of Australian cartoonists under the caravan of comics banner who were also heading up to Toronto for the TCAF festival. 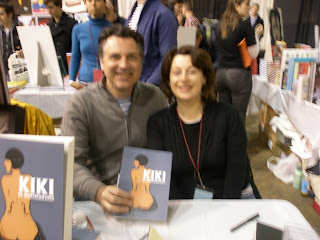 Many fine moments were shared with our international colleagues including a special treat for me meeting the Paris based Jose-Louis Bocquet and Catel Muller, the talented and personable team behind Kiki De Monparnasse. I'd brought a copy of their wonderful book all the way from the UK for them to sign which tickled them seeing how well travelled we had all been to meet in the US, (with apologies for the wee photo blur - hope yours came out better!). 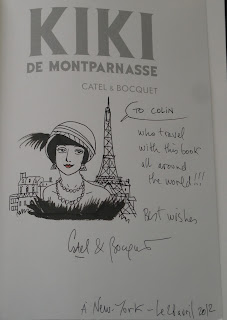 I also had a lovely 'fanboy' moment with gracious Norwegian comics superstar Jason who had strong lines both day when signing at the Fantagraphics table. I've a fair few of his books, but not them all yet, but mindful of luggage restrictions opted for a softcover of his Last Musketeer which looks great. 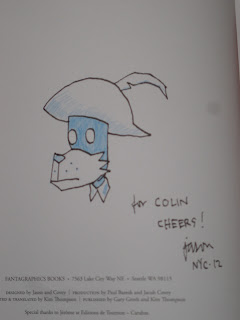 Good to catch up again with the newly beardless Alec Longstreth a man of many talents including acting principal at Vermont's Centre for Cartoon Studies while James Strum enjoys a sabbatical. Accent UK have enjoyed good links with the CCS crew since bumping into Steve Bissette at one of the Copenhagen comic shows a few years back so it was good to hear what they're up to, although I foolishly forgot to pick up a copy of their acclaimed Cartoon Crier paper which thankfully is now available online. 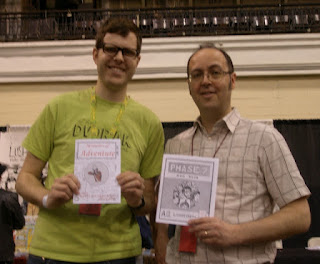 Also chatted with CCS alumni (and Accent UK contributor) Morgan Pielli who has been pretty prolific it seems with a couple more issues in his interesting 'Indestructible Universe' book. Brooklyn based Morgan was able to pass on some useful info on other US indie shows that we may consider for next year. At the moment we're torn between becoming a MoCCA regular or perhaps attending another US indie show such as SPX, Stumptown etc to spread the Accent UK word in other US states. It's a tough choice though as the established shows are hard to get into and any new show is a gamble as to whether your books will find an audience and of course it's an expensive business flying across the Atlantic. Next year we should also have a return to Denmark to look forward to as well so it could be a busy time. New York though is pretty accessible from the UK and MoCCA is darn good fun so would be good to do them all! 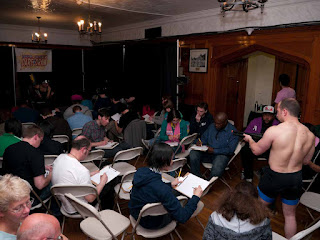 Dave and I did have time though to join the energetic Charles D Chenet for a special Dare 2 Draw MoCCA session of life drawing which was terrific fun, harder than it looks but great to just sit there and draw with many other folks in a busy session.

NY based Simon Fraser is another stalwart supporter of the Dare2Draw events and hosted a special portfolio session at MoCCA. He mentioned that he's going to be a guest at this year's Thought Bubble show in Leeds which will be, I think, his first UK show since moving to the states some 5 years ago? 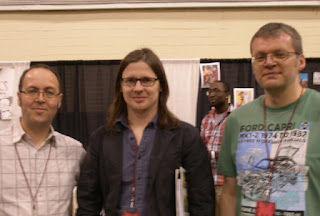 Shout outs too to talented Tom Gauld, who's originally from the same Aberdeenshire neck of the woods as me - well about 10 miles or so away - who seemed to be enjoying the first leg of his North American tour. Tom had also been at London's Comica Comiket show the previous week and was looking forward to the jaunt to Toronto and TCAF next. As we'd also met him at London, we reassured him that we weren't in fact stalking him and that he'd be quite safe in Toronto since we wouldn't be there!. Have to say though that we were quite envious of those staying on for the Toronto trip as it sounds a cracking show. 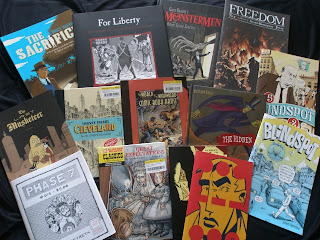 Picked up a fair few interesting books and things on my trip but, mindful of weight and economics, didn't go quite as mad as last year.  Looking forward to reading them all, especially my American Revoultion books Freedom picked up at Brooklyn's excellent Desert Island store and For Liberty from fellow MoCCA attendee Timothy Decker and his delightful wife Alison whom we exchanged supportive comments to during the shows quieter spells.

And that was that, it passed all too quickly, just the jet lag, photos and books to show for our efforts!

P.S also picked up a strange little Ames guide from an art store - I haven't a clue what its for but got Dave excited about it so had to buy one!